Daniel Shockley says he’s been homeless , “About four months, this time.” Shockley had been living with his girlfriend near Modesto’s Fourth Street when a breakup left him with nowhere to go but the park.

“The police were real nice,” he said Thursday. “They helped me move all my stuff here. Otherwise, it would have meant too many trips.” Shockley still doesn’t have a tent. Like other new arrivals, he plans on using a tarp in the meantime.

“Here,” is Modesto’s Beard Brook Park, where over forty tents have materialized since the City of Modesto designated it a permitted camping place. Even though “No Camping” signs still hang on trees throughout the park, the tents are going up as the result of a Ninth Circuit Court ruling that homeless people with nowhere to go should be allowed to sleep in public places.

Shockley moved from Fourth Street Park to Beard Brook because police told him there were better facilities there and because they hinted that other public places might be less welcoming in the near future. So far, city officials favor Beard Brook because it’s relatively distant from residential neighborhoods, it’s long been a favorite of homeless people anyway, and it’s out of sight of major public thoroughfares.

Frank Ploof has been doing volunteer outreach work with homeless people throughout Stanislaus County for over four years. He thinks camping in Beard Brook Park can work, “If it’s managed.” 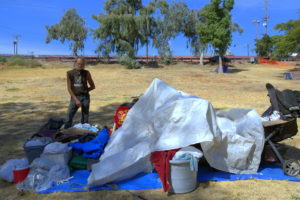 Thursday, Ploof was chatting with a couple of campers he’s known for years when a journalist from KCRA Channel 3 showed up. Journalists throughout the region will be following the camping story closely, in part because opponents and supporters of camping are so passionate about the issue.

Opponents say camping increases crime and enables people who don’t want to work to settle into an indolent lifestyle. Proponents say it’s the quickest and easiest short-term solution to an escalating homeless problem most believe has been exacerbated by rising housing costs.

Modesto City Councilmember Kristi Ah You has long supported camping at Beard Brook because she’s sees it as the only quick alternative to getting people off the streets. She and Councilmember Jenny Kenoyor toured the park last week, making certain the city delivered on its promise of Porta Potties, water, and trash bins.

Those features have been missing over the decade that homeless people have favored the park, with the veteran inhabitants moving readily to nearby locations when routine police sweeps cleared them out. Harmful effects from the lack of sanitation throughout the city are a major reason many people support lightly-supervised camping in designated areas.

Ploof estimates that about four new tents have been going up per day during the last four or five days. He expects many more as word gets out and temperatures begin to cool. Even when camping was technically illegal, Beard Brook Park had as many as fifty tents in the winter. This year will undoubtedly feature many, many more if the city policy of permitted camping continues.

For Daniel Shockley, the camp could mean the first step back to his former occupation as a truck driver, a job he lost when his driver’s license was suspended and he couldn’t afford to renew it. “I sure would like to get back to work,” he said Saturday, as he surveyed the belongings scattered beneath his feet on the sloping hill of Beard Brook’s west boundary. “I used to make good money.”