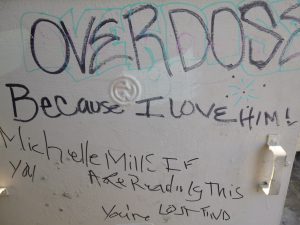 Though still little-publicized, more and more young people are falling victim to the demons of addiction, especially opioids. Law enforcement officials in Oakdale noticed a surge in heroin use among young people in 2013, and attributed it to the availability of cheap “black tar” heroin that has caught a rising number of teen-agers and young adults in the cruel trap of an addiction that drives a host of crimes ranging from prostitution, petty theft, auto theft, and upward.

Many young people become homeless when their parents can no longer deal with their drug use. Once homeless, they enter the endless—and mindless—cycle of addiction, arrest, release, arrest and release again that is society’s default answer to drug use—unless, of course, the child has wealthy or powerful parents.

In those cases, public sympathy can transform the addicted youngster from a common criminal to a sick victim in need of help and the best medical science available. That was the case when Jeb Bush’s daughter became one of the most celebrated examples of recovery after a court-ordered stay at an addiction-recovery center.

After experiencing first-hand the piercing agony of a loved one’s addiction, Bush became a believer in court-ordered treatment and promised as a presidential candidate to support a holistic approach to addiction, featuring, “multi-disciplinary coordination, including the judiciary, the prosecution, mental health specialists, social services and treatment professionals.”

Unfortunately, Bush’s personal experience and the successful recovery of his daughter Noelle haven’t translated into a broader understanding of drug use and addiction nation-wide. Despite overwhelming evidence that the arrest and imprison cycle doesn’t work, it’s still our first and often our only response to addiction.

Bush wasn’t the only presidential candidate with a family connection to the agony of addiction. Carly Fiorina’s stepdaughter died of drug addiction and the experience led to Fiorina’s conviction that, “If you’re criminalizing drug abuse and addiction, you’re not treating it—and you’re part of the problem.”

Nonetheless, most regions of our nation, including the San Joaquin Valley, remain, “part of the problem.” In fact, even the mention of homelessness itself often brings on a chorus of, “It’s the drugs,” and even louder rants about, “The needles, the needles!” The problem with these responses is they offer only condemnation and disgust, when what we really need are comprehension and  treatment.

Every day, more people are willing to examine statistics about the causes of homelessness, including such things as the lack of affordable housing, deinstitutionalizing the mentally ill, and wage stagnation. So far, there still hasn’t been a comparable understanding of the physiology of addiction and its role in homelessness. Instead, homeless addicts are routinely demonized as deserving of their fate because of their “choice” to use drugs.

But advances in brain science and physiology have shown that drugs actually destroy and re-route the brain’s neural circuits; addiction tricks the brain into thinking drugs are necessary for survival. Choice becomes irrelevant when the brain perceives drugs as essential as food or water. Moreover, new research has shown that some people, especially those diagnosed with mental illnesses like Obsessive/Compulsive Disorder and schizophrenia, are far more susceptible to addictive behavior than most.

Widespread local support for Laura’s Law, which enables court-ordered treatment for people with serious mental illness, needs to be followed by support for Casey’s Law, which would facilitate court-ordered treatment for people in danger of death from drug use and overdose. Over thirty-three thousand United States’ residents died from opioid overdoses in 2015, and the numbers will only get worse unless we begin effective treatment as soon as possible.

Some will argue that medical approaches to addiction are far too costly and that addicts aren’t worth the expense. In fact, the cycle of hospitalization, crime, incarceration, and costs to businesses and residents are far greater than those of treatment. Failure to treat drug addiction as a health problem has resulted in what amounts to a regressive tax for those who must pay for enforcement and incarceration while experiencing ongoing losses in business and property values.

Like mental illness, addiction afflicts people from all social classes and levels of achievement, and more and more young people all the time—especially young and homeless people. Arguments that addicts aren’t worth the expense of treatment are arguments against humanity itself. A wealthy nation that calls itself Christian can do much, much better.