For decades, valley citizens have been lamenting the exodus of their children to distant locations. “We have to make our cities more attractive so our kids will want to come back here and live,” they say. But still the kids leave and don’t come back.

The exodus of the valley’s best and brightest young people is no mystery. Over the years, a dark shadow has fallen across a region that was once a bright land of promise. Today, from one end to the other, the San Joaquin Valley is led by minions of Donald Trump, a man who squats in the nation’s Oval Office like a putrid abscess, oozing civic and moral corruption.

In Stanislaus County, supervisors Jim DeMartini and Dick Monteith praise Trump and Trumpism to the heavens while their fellow Republican board members try to divert attention from the ugly reality of a president they prefer not to admit they voted for.

But Trumpism didn’t happen overnight. Like the rest of the nation, the economy of the San Joaquin Valley has slowly become a cruel engine of injustice, punishing the Valley’s hardest workers with unlivable wages and ever-rising costs for housing, health care, and transportation. The greatest agricultural region in the world has become monolithic and insular. Rising land costs have made entry-level farming a thing of the past, and technology is eliminating more jobs every planting and harvest season.

With few exceptions, the Valley economy has failed to diversify. Under Republican leadership, innovation and opportunity have lagged, and partnerships between government and private enterprise have too often failed to go beyond subsidies and tax breaks for farmers.

The Valley’s old guard Democrats have been beaten into a conventional wisdom that tells them the only way they can win elections is by, “moving to the right.” Despite the evident failure of that strategy, none can muster the courage to revive Democratic fundamentals of equality, social justice, and economic opportunity. No wonder their kids prefer elsewhere.

It was only in January of 2017 that Valley citizens saw the beginnings of a movement that offers hope and the promise of change. The global Women’s March lit a torch around the world, and nowhere was it more inspiring than in the San Joaquin Valley.

By late last summer, energized Valley citizens were preparing to run for office and take back government for the people in a region where far right Republicans had dominated for years. Exciting young candidates like Valley native  Andrew Janz were daring to run against entrenched Republicans like Nunes, the incumbent in Congressional District 22 (CA-22).

Only thirty-four years old, Janz majored in economics at CSU Stanislaus, in Turlock.  In the first two days of February of this year, he raised $165,900. That was on top of the hundreds of thousands of dollars he’d already accumulated.

In the neighboring district, CA-21, former CA-10 favorite TJ Cox is running against David Valadao. Cox has spent years in the Valley, building partnerships with government and private enterprise, leveraging money to create jobs and to provide better access to health care.

In Jeff Denham’s Congressional District 10 (CA-10), a host of candidates declared for the Congressional Primary. But the Democratic embarrassment of riches quickly turned into a frustrating dilemma. Even after Dotty Nygard dropped out and Cox switched to CA-21, Democrats in CA-10 still had too many candidates to choose from.

The race became even more complicated when two-time contender Michael Eggman jumped in, after vowing months before that he wasn’t running. With Eggman in the race, candidates like Virginia Madueno and Sue Zwhalen were no longer the only establishment favorites. Eggman seemed to have garnered the prized stamp of official party approval.

But in the San Joaquin Valley, outside party approval hasn’t led to winning politics. Too often, there’s been a disconnect between party officials and local voters.

Prior to Eggman’s late entry, Cox and Turlock native Josh Harder were early frontrunners in the strong Democratic field—after a recount, they tied for support at the Democratic Regional Conference in January. Like Andrew Janz, Josh Harder took a degree in economics, but his was at Stanford, not CSU Stanislaus. 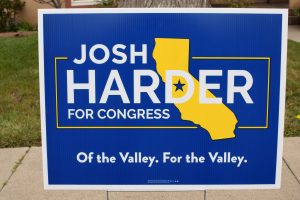 Early success in business outside the valley didn’t keep Harder from returning to his roots. Instead of pursuing wealth and opportunity elsewhere, Harder came back home and took on the imposing challenge of unseating an incumbent in a district long viewed as a secure Republican stronghold.

Though he’s even younger than Andrew Janz, Harder can also raise money. He’s brought in over a million dollars already, and his campaign continues to gain momentum. For Valley Democrats, the prospect of a trifecta win—Harder in CA-10, Cox in CA-21, and Janz in CA-22—would establish not only a high water mark for the Blue Wave, but offer hope for a stronger and more diversified local economy, brought about by a team of Democrats with the knowledge and experience to make it happen.

A year ago, the prospect of bringing social and economic justice to the San Joaquin Valley seemed dimmer than ever. Today, Valley citizens can unite and carry three candidates into congress on a Blue Wave of democracy that could also bring back the promise and opportunity that once brought the best and brightest of our young people back home. What they need now is the unity and courage to move forward and make it happen.