In late 1975, while at UC Berkeley, I was guided into the path of a prophet, Paul Schuster Taylor. Retired Professor of Economics at UC, widower of the renown documentary photographer Dorothea Lange, longstanding critic of California’s large-scale agricultural structure and its historic political power over the state’s water resources and farm labor conditions – Paul was a force even at 80, when hindered by Parkinson’s and glaucoma. I was drawn to him like a moth to the back porch light, but rather than dashed to pieces by the encounter, I was reclaimed.

The rest of the story isn’t exactly history, as we say, because I am still digging Paul’s trenches. But the history is important, and that’s what the new book by Daniel J. O’Connell and Scott J. Peters provides: the story of a storm in which many people were struck by Paul’s lightning and went on to contribute their energies to the struggle for the common good.

In the Struggle begins with one of Paul’s students, Walter Goldschmidt, himself renowned for conducting two studies on the effects of large landholdings on small town development. After revisiting Paul’s history of battling first the Germans, then the political empire of agribusiness, the book narrates the stories of Ernesto Galarza (Stanford scholar famous for his war on the Bracero Program), Isao Fujimoto and Dean MacCannell at UC Davis (rural sociologists who undertook updates of Goldschmidt’s findings at the macro level) and Don Villarejo (who left the field of experimental physics to build the non-profit Institute for Rural Studies, which challenged the UC system for its bias toward mechanized, industrial agriculture and conducted studies on labor, water and farm size for years). 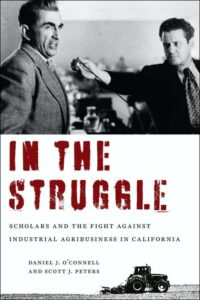 It also includes chapters on my efforts (especially since moving into the Tulare Basin almost 30 years ago to spread the good news) and those of newcomer Janaki Jagannath, a protégé of Fujimoto’s who went to law school and then helped organize the Fresno County communities of Cantua Creek and El Porvenir to receive decent drinking water.

These are only a few of the lightning bolts from the ongoing, eternal storm over the Valley’s water and land, but their stories, taken together, show us much about what we face in the next few years and how we should enter the struggle. We are also reading, between the lines, the story of yet another lightning strike “victim,” Dan O’Connell himself, who directs Fresno’s Central Valley Partnership, a progressive network of labor unions, environmental organizations, and community groups spanning the San Joaquin Valley.

If you’ve never heard of Paul Taylor, however, or any of these other soldiers of the common good, you will find the portrayals of them helpful introductions to the real battle at hand.  As Paul wrote at the end of his first article on the Central Valley Project, published in 1949 before construction had even begun:

“Citizens of the Valley have not learned the crucial importance to their own future of the work of their own local water districts. . . . The character of communities to be created is in the hands of the people of the Valley, and of the Congress.”

The battle over water and land is at hand, and our hands are needed. Nothing will improve if we don’t engage. Reading this book would be a good starting point.

In the Struggle: Scholars and the Fight against Industrial Agribusiness in California can be obtained by contacting the publisher at https://nyupress.org/9781613321225/in-the-struggle/.  The price is $24.95 plus tax and shipping.

Trudy Wischemann is a writer and a columnist for The Foothills Sun-Gazette, which admirably serves the small citrus-belt towns of Tulare County.  You can view her column “Notes from Home” at www.thesungazette.com.  She is also compiling a volume of writings on California Agriculture and the Common Good to be published next year through West of West Books.