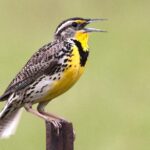 In Part I of the Our Wintering “White” Geese post, we learned about the larger “white Goose with the Grinning Patch”, the Snow Goose. In this post, the star of the show is the smaller Ross’s Goose. Introduction The Ross’s Goose is a Fairly Common Winter Visitor found almost exclusively in winter in the Central Valley. Similar to the Snow Goose, its preferred habitats are fresh emergent wetlands, adjacent  waters […] 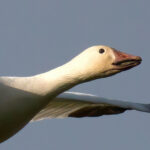 “Your first indication of their presence is the distant sound of baying hounds. As you look up, you see the sky flecked with tiny white moving shapes, which appear like snowflakes drifting lazily across the azure sky.” naturalist J. B. Grinnell There are two species of “white” geese in the Valley. The Snow Goose — Anser caerulescens —  is the larger and more widespread species compared to its cousin, the […] 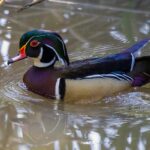 The Wood Duck (Aix sponsa) is arguably the most spectacularly beautiful duck in the Central Valley. It is a Fairly Common Year-round Resident throughout the wetlands and waterways of the valley. Similar to other dabbling ducks, the Wood Duck is an omnivore with a broad diet of seeds, fruits, and aquatic and terrestrial invertebrates. Appearance Wood Ducks have a unique shape among ducks — a boxy, crested head, a thin […] 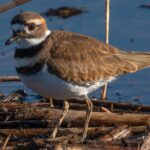 The Killdeer (Charadrius vociferous) is a Common Resident in the San Joaquin Valley. Killdeer belong to the plover family Charadriidae, with 68 species worldwide. As their Latin specific name indicates, they are quite noisy (vociferous). Description Killdeers’ upperparts are mostly brown with white underparts. Their upper chest is interrupted by 2 black bands. The sexes are monomorphic (alike) and plumages are essentially identical throughout year. Distribution Killdeer can be found from Canada, […]