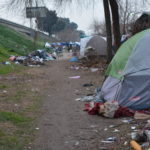 An overflow crowd at Modesto’s first permitted tent encampment in Beard Brook Park has grown to over 400 residents in a few short months and there’s still no shortage of homeless people in their usual haunts, including downtown Modesto. And until there’s better comprehension of the realities behind traditional economic indicators like stock market reports and official unemployment figures, the numbers of homeless and poor people will only continue to […]