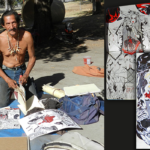 With a profile that could easily have served as the “heads” side of an American coin honoring its native residents, Edward “White Horse” Mendez was a legendary presence among the small circle of homeless people who lived in and frequented Modesto’s Beard Brook Park. He died Wednesday, March 10. He was sixty-eight years old. “White Horse taught me how to survive out here,” said one man several decades his junior. […]