The .45 caliber bullet did exactly what it was designed to do. It killed.

Entering the body of Evin Olsen Yadegar at the left rear shoulder,  expanding, mushrooming, fracturing bone and lacerating vessels, organs and muscles, slowing from about 600 miles per hour—the speed at which it left the gun fired by Deputy Justin Wall—until, its energy spent, coming to rest in her lower right torso.

The  photo of that slug taken from Evin’s body by the autopsy surgeon shows how the brass “petals” had peeled back from the lead core like the petals on some evil flower. This is what a hollow point bullet is supposed to look like after passing through human flesh.

As disturbing as that image is, the events of that night that led to the decision to kill her may be even more disturbing. Was the conduct of the Stanislaus County Sheriff’s Office that night in February of 2017 something which could happen again?

Last week, linked bills in the California legislature which would have changed the standard for the justification of police shootings and would have mandated de-escalation training, either of which might have affected the outcome of this incident, failed in committee. Seems like a good time to revisit and update what we know about what happened that night.

So, in this piece we examine the decision to chase–to continue to pursue Evin Yadegar; the plan to “sic” a police dog on her, and the decision to use “lethal force” rather than a Taser on a woman acting irrationally. 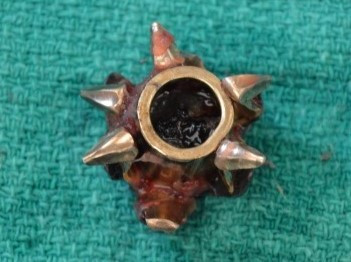 We will see that in the pursuit from the first contact with deputies in Salida until she stopped her car at Manley Drive and Tornell Circle, other than refusing to stop, she drove almost “politely.”

When she turned off Highway 99 onto the Ripon exit, her turn signal was on, as it was when she stopped and turned right onto Manley from Main. She was using her turn signals with all four tires flattened by spike strips, at speeds you could count on both hands.

We now recap the events, weaving into the known facts newly discovered information, some of which contradicts previously disclosed information.

Included will be the question of how you shoot someone in the back when you are standing in front of them.

It begins with Evin in the throes of a mental health episode caused by her failure to take bi-polar medication. She appears at the Hampton Inn in Salida, where she comes in contact with a security guard. She tells him she is looking for a room number which does not exist in that motel.   Within her possessions is a valet tag for a downtown Modesto hotel which might have that room number.

As the security guard urges her to leave, she says—out loud—her inner thoughts, maybe what the voices are telling her: “Push him, hit him,” she says to the guard.

The guard escorts her to her car. The Sheriff’s office is called, given a description of Evin’s gray or silver sedan, and dispatches a car. It is about four minutes before 3am, February 26, 2017.

By 3 am, the sheriff’s office had a description of Evin, her car and that she was last seen eastbound on Kiernan Avenue. She would die about 20 minutes later.

Deputy Fernando Gomez spotted the silver sedan, turned on his emergency lights and tried to pull her over. She simply refused to stop. She did not speed away. Other deputies lined up behind Gomez including Deputy Wall. He had been east of Riverbank, getting ready to go off duty after a 12-hour shift, but raced west to join in.

Half a dozen deputies, or more, got involved.  Some followed Evin’s car while others put out spike strips to flatten the car’s tires.  She looped through a residential neighborhood in Salida with speeds recorded as low as 9 mph.

She spent about 12 minutes leading the patrol cars and SUVs through a subdivision west of Sisk and North of Pirrone, on streets named Sun West, Sun Gold, Sun Glen before getting back near where the chase started, then turning on northbound Highway 99 at about 12 minutes after 3 am.

(During this time deputies not involved in the chase were kibitzing on the radio, laughing at the low speed of the chase and, less kindly, suggesting things like hitting her in the face with a bean bag)

Deputies and the CHP shut down traffic behind her as traffic ahead of her went off into the distance as Evin was only going about 40 mph at the fastest, all four tires having been flattened by spike strips.

About five minutes after getting onto the freeway, Evin signaled a right turn to take the Main Street off-ramp into Ripon.

Let’s stop there. It’s about 3:17. What could the deputies know at this point?

She was not acting normally. One deputy expressed the thought she was having a seizure. Another reported that as she drove past his position, she was laughing. One deputy asked dispatch to stage an ambulance in the vicinity. Her driving did not endanger anyone. Her speeds were at a crawl, even before all four tires were punctured. She simply refused to stop.

Also, contact had been made—face to face—with the security guard and he did not want to press charges. So, the only criminal act committed at this point, was the vehicle code violation of failing to yield, a misdemeanor at best.

Back to the chase: Ripon police set up a block where the off ramp intersects with Main. Evin stopped. The deputies following closely, including Wall, piled out of their cars and approached her.

She looked around at the deputies and either smiled or laughed. Then she slowly drove away because the Ripon patrol car had not completely blocked the intersection.

What happens thereafter is shown on this videotape:

Some things need to be pointed out, for clarity, or because they raise other questions. When Wall first comes around his SUV he pulls something then holsters it. Was this a Taser? Wall has said he considered use of a Taser, but felt he had to provide “lethal cover” for the other deputies, including the deputy who was going to let his K-9 loose on Evin once they got her door open.

Evin reacted to the shattering of the driver’s side window. She flinched then moved her right hand down toward the gear shift lever. Her “back-up” lights go on, then she makes a maneuver like the one you would make from a parallel parking place with cars in front and behind, when you simply back up, turn the wheel, and then slowly pull forward and away.

It is clear that Wall had drawn some weapon as he first approached Evin’s car and he can clearly be seen holstering that weapon. Did he later pull the .45 caliber automatic and fire the four shots in the same motion? Or had he re-drawn before?

Then we come to the major conflict between Wall’s memory and what is shown on the videotape: Which direction was Evin’s car going–forward or backward—when he fired?

Even after he reviewed the video, Wall maintained he fired as she was backing up. But the fatal bullet struck Evin in the back, which seems a physical impossibility if he fired while she was backing up, since Wall was standing at about the level of her left front tire when she backed up that few feet.

Ultimately, the San Joaquin County District Attorney’s office filed manslaughter charges against Wall, but only after the contents of the videotape, which had been kept secret, became known. Wall was held to answer after a preliminary hearing but his arraignment has been put off until June. It is expected that defense counsel will then file a motion to set aside the preliminary hearing finding.

The civil action filed by Evin’s widower, Hanibal and their son Antoneous, also has been delayed as defense counsel for the County of Stanislaus argued that until the criminal case was resolved, Wall could not be required to testify in the civil case. It probably will not go to trial until mid-2020.

According to court filings, two attempts to mediate the case have failed.

So why bring up this detailed account at this point. Well, last week two aspects of the case came up in highly contested legislation. One bill would raise the standard for the use of deadly force. That bill was linked to a bill requiring mandatory de-escalation training, the kind of training which might have caused the deputies involved in the Ripon tragedy to reconsider their continued pursuit of Evin and, of course, how to end it without harm.

The bill changing the standard failed to get out of committee after heavy lobbying by law enforcement. And, since the bills were linked, the de-escalation training requirement also failed.

We have a new sheriff who has yet to weigh in on this incident as it occurred under the stewardship of former Sheriff Adam Christianson. That Sheriff never spoke critically of any of the deputies involved and spoke sympathetically of Wall’s plight as someone whose conduct had come into question. He, the deputy, had become a “suspect” and had to have an attorney, Christianson lamented. In fact, in one statement he implied that Evin brought this upon herself.

We are left to wonder why someone–someone supervising– didn’t call a halt to the pursuit. How would it have ended if one patrol vehicle, its lights turned off and its siren silenced, simply followed Evin? There was never any indication of a weapon. Her driving never threatened.

It’s hard to see how it could have ended worse than it did.

(Note: I could apologize for how grisly and grim this commentary is, but I thought a dose of reality would be important. These armed men and women are acting on our behalf. They are our employees. We need to know what they are doing. If the officials we elect are not forthcoming the details must be ferreted out.)