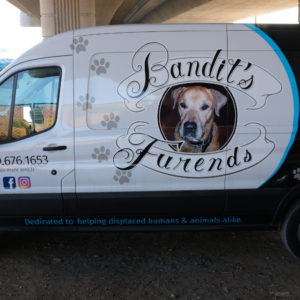 Before a routine outing, Misty Eckerdt, assisted by family and volunteer friends, packs 1000 pounds of dry dog food into gallon baggies. That doesn’t include the canned food, leashes, doggy jackets, toys, blankets, medicine, and a few items for cats that she and her crew load into the Ford cargo van she uses when she visits sites frequented by poor people and their pets.

The van features a large photo of “Bandit,” a 187 pound Rottweiler/Mastiff that was Eckerdt’s pet when her family was stationed in Germany on military duty. When it came time to come back home, Bandit got a plane ticket just like the rest of the family. The beloved pet passed away in 2014.

Last Saturday, Eckerdt and her crew were at Modesto’s Outdoor Emergency Shelter (MOES), where they’ve been helping people and pets since it opened last winter.

“We used to come weekly but I realized we were enabling instead of helping, so we started coming monthly instead,” says Eckerdt. She and her team also visit parks, camp sites, and poor neighborhoods in and around Modesto.

Word spreads quickly when the Bandit’s Furends* van pulls in, and it isn’t long before a long line forms even before the vehicle is unloaded.

“Tell people we’ve only got enough for one pet at a time. They’ll tell you they have friends who can’t make it here, but I know all the runners who are helping people, so send them to me if they say they need more,” says Eckerdt to her crew. “We’ve got about 300 dogs here at MOES and there’s enough for that many, but no more.”

Helping a hundred or more poor and homeless people at once can be chaotic, but Eckerdt and her crew operate with practiced precision. “People have about two minutes to make up their minds about what they want,” says a volunteer. 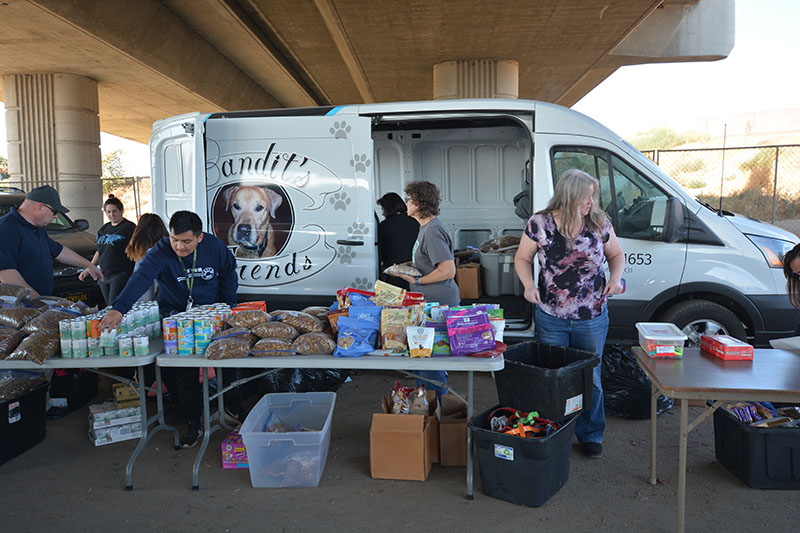 Eckerdt adds, “Sure, if they’ve got a female dog and want a pink jacket instead of a blue jacket, we try to give them a pink jacket. But we have to keep the line moving. We have lots to do besides give out food.

In addition to handing out food and doggy clothes, Eckerdt and her crew clip nails and apply flea medicine. They fit doggy jackets. They offer advice for people with problems too serious to be treated on site. They can sometimes help with vet bills, spay/neuter and boarding.

The motto on the van underneath Bandit’s picture reads, “Dedicated to helping displaced humans and animals alike.” Eckerdt and the rest of Bandit’s Furends try especially hard to watch over pets for people who go into rehab for drug or alcohol use. Their mission statement reads,

“We don’t want people not bettering themselves because they think they have to give up their pet. This also keeps animals out of the shelter.  In the end the owner and pet reunite both healthy and happy getting ready to start a new journey together.” 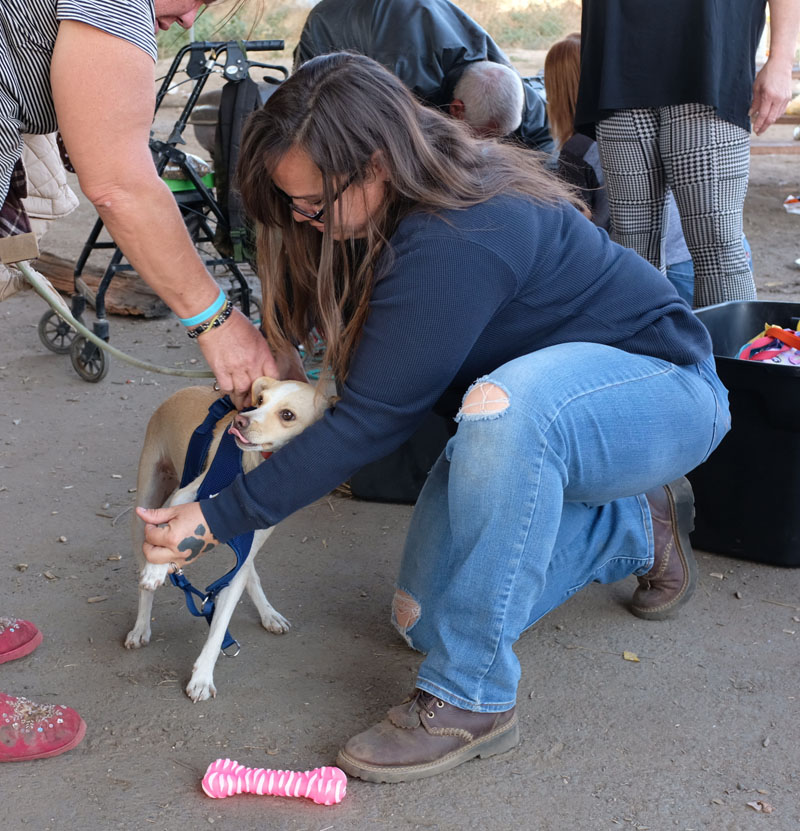 Eckerdt sees her mission as much about educating as helping, and she frequently refers people in need to one of Modesto’s Homeless Outreach teams. And woe be unto anyone Eckerdt finds abusing or neglecting an animal. Her mission statement also says,

“We WILL also make reports with Animal Control if we feel there’s ANY kind of animal abuse or neglect!!!! We don’t take kindly to that!!!” (sic)

Like Dean Joseph Dodd, who operates the Cleansing Hope Shower Shuttle, Misty Eckerdt doesn’t think the need for her services will end anytime soon, even though a new shelter will be opening before the end of the month. She believes some people won’t like the new restrictions on pets, and others will revert to the streets rather than put their pets in kennels during the night. 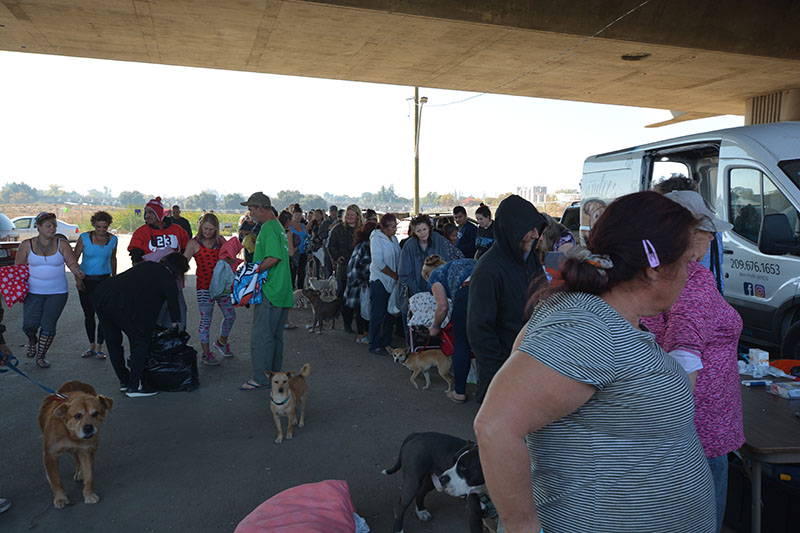 Knowing that a pet is often more than a poor person’s best friend, Eckerdt will keep offering help and advice as long as she can. Homeless people themselves often say their dogs know when a person is good or bad even when that person is around the corner and out of sight.

“My dog tells me when trouble’s coming,” said one man Saturday, “and he can tell when someone’s no good. He’s saved me lots of times.”

And in any case, homeless people aren’t the only ones who benefit from Eckerdt’s tribute to her beloved pet Bandit. “We also visit the motels on south 9th Street and other places people need help,” she says.

At 187 pounds, Bandit was a big dog, but his memorial mission is even bigger. One way to tell is that when Bandit’s Furends show up, the dogs get friendly. It’s a sure sign good people are in the neighborhood.

*Entirely self- and volunteer-funded, Bandit’s Furends is a non-profit organization. Its mission statement and other information can be found on Facebook.