It’s only in the last few years that Bald Eagles have returned from a long absence to nest in the foothills and around the lakes and reservoirs of the northern San Joaquin Valley. Increasingly common, sightings of our majestic national symbol still fill people with admiration and awe; it’s easy to forget how close the eagles came to extinction—the once widespread raptors almost disappeared from the lower forty-eight states only a few decades ago.

Bald Eagles were placed on the endangered species list in 1973, at the same time as the passage of the Endangered Species Act. Their decline was traced to reproductive failure caused by a residue from DDT. Once DDT was banned, the eagles began a long period of recovery.

In part because of successful efforts with popular birds like the Bald Eagle, and despite a decades-long, multi-million dollar effort to repeal it, the Endangered Species Act (ESA) has remained one of the most popular government programs ever established. When it was passed, bipartisan support for the ESA was overwhelming; the vote in Congress was 482-12 in favor of saving our nation’s threatened wildlife heritage.

More recently, conservation reports reveal public support for the ESA has remained as high as 80% throughout the almost fifty years of its existence. In addition to the Bald Eagle, the ESA has protected over 2300 species, subspecies and distinct populations since enactment.

One of the most successful recoveries has been in Stanislaus County, where the formerly endangered Aleutian Canada Goose recovered from a low of under six-hundred individuals in the 1980s to a population now estimated at almost 200,000.

A close relative of the diminutive Cackling Goose, and most easily distinguished by the white collar at the base of its neck, Aleutian Geese were threatened both by predatory Arctic Foxes on their northern nesting grounds in the Aleutian Islands and proposed development on their wintering grounds. 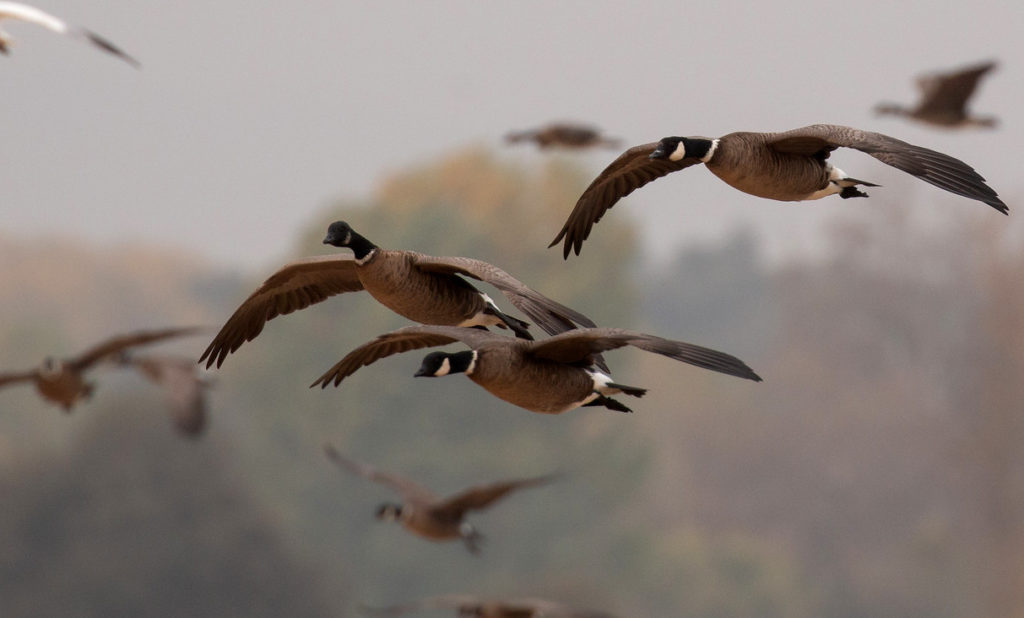 The foxes were introduced to the Aleutian Islands by Russian fur traders. Aleutian Goose wintering grounds in the 1980s were almost solely limited to farm and ranchlands between the confluences of the Tuolumne, San Joaquin and Stanislaus Rivers in western Stanislaus County.

Though the wintering grounds were ultimately saved by a remarkable effort involving the National Audubon Society, private landowners, and the U.S. Fish and Wildlife Service, the major factor in their protection was the Endangered Species Act; it provided legal justification for protecting the birds’ habitat. With their wintering grounds safe, the geese began a steady recovery when the last of the Arctic Foxes were removed from their nesting grounds.

Today, the spectacular overflights of wintering Aleutian Geese have been joined by a multitude of other species, including Snow and Ross’s Geese, Canada Geese, and White-fronted Geese, as well as numerous species of ducks. The waterfowl are attracted to the San Joaquin River National Wildlife Refuge, which was established to provide habitat for the endangered Geese and associated wildlife.

In addition to protection afforded by the Endangered Species Act, Bald Eagles and Aleutian Geese until recently were protected by the Migratory Bird Treaty Act. Now, both the Migratory Bird Treaty Act (MBTA) and Endangered Species Act have been undermined by revisions ordered by the Trump administration. Essentially a gutting of both acts, the revisions mark a tragic comedown for a party once proud to claim the legacy of Republican Theodore Roosevelt.

Roosevelt helped establish 230 million acres of public lands during his presidency, including 150 million acres of national forest. Under Trump, the nation’s public heritage is under an unprecedented assault, as more and more public lands have been opened up for exploitation by private enterprise, especially the fossil fuel industry. 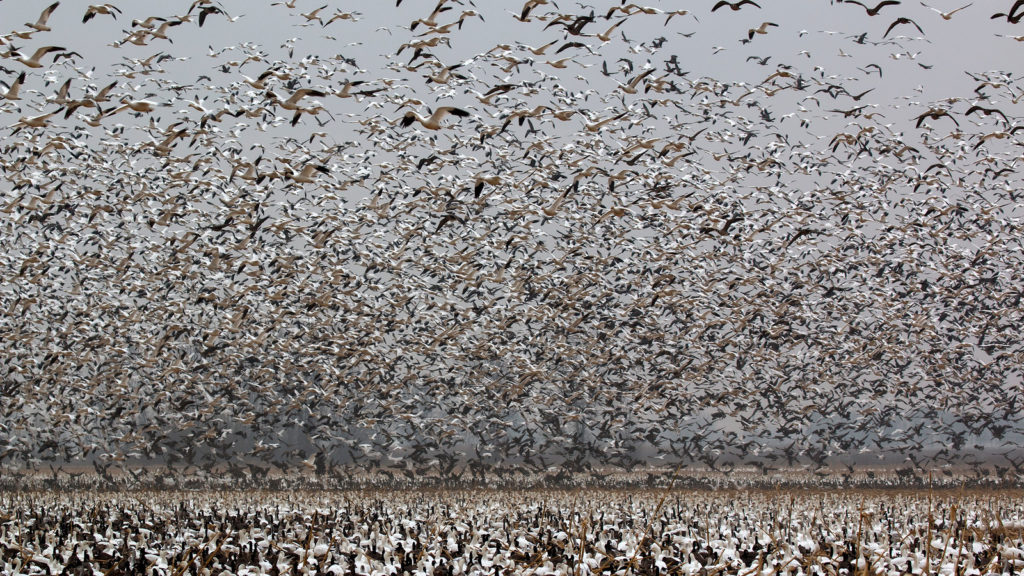 But the new Republican Party isn’t just assaulting America’s public heritage, it’s also attacking science and democratic principles. Government science reports on topics ranging from climate change to adverse effects of drilling for oil in the Arctic have been suppressed, censored, redacted and revised under Trump. Even a ban on chlorpyrifos, a pesticide shown conclusively to retard brain development in young children, was lifted by the EPA after pressure from the chemicals industry.*

Revisions to the Migratory Bird Treaty Act and Endangered Species Act aren’t just about wildlife. They’re also about lifting restrictions on the wholesale destruction of public lands. They’re about drilling and fracking and poisoning the environment.

Few places in the United States are as vulnerable to destructive exploitation as California’s San Joaquin Valley. The U.S. Geological Survey has written that the Valley contains, “one of the single largest alterations of the land surface attributed to humankind.” Over 5,200 square miles of irrigation land have subsided at least a foot since the introduction of irrigated farming; some places have subsided well over twenty feet.

Over 95% of the Valley’s native wetlands and riparian forests, the kinds of places that harbor wintering ducks, geese, and swans, have already been lost to urban and agricultural development. Imagine what could happen to the remainder without the protection of the ESA and MBTA.

Fortunately, California state authorities are pushing back against the assault on wildlife. In addition to joining other states in litigation against changes to federal protection for migratory birds and endangered species, California legislators have established new state guidelines that preserve the spirit and purpose of the MBTA.

But even with resistance from the state, the Valley continues to face threats of environmental degradation posed by the Trump administration. Last fall, federal officials began attempts to open 1.6 million California acres for drilling and fracking, with much of that acreage located in the southern San Joaquin Valley.

Fracking can contaminate groundwater and increase the probability of earthquakes, while continued use of fossil fuels threatens to accelerate climate change, already coming on almost too fast to reverse.

None of this matters to the new Party of Trump, but when the history of the Trump era is written, it will note that among the most singular achievements of a president who lost the popular vote has been his ability to enact and enforce policies the vast majority of U.S. citizens oppose. In attacking the nation’s natural resources and native wildlife, the Trump administration has established a new tyranny of the minority—not just a threat to nature itself, but to majority rule, a fundamental tenet of democratic societies everywhere.

“Every time we turn our heads the other way when we see the law flouted, when we tolerate what we know to be wrong, when we close our eyes and ears to the corrupt because we are too busy or too frightened, when we fail to speak up and speak out, we strike a blow against freedom and decency and justice.”
― Robert F. Kennedy

*The State of California has extended the ban on Chlorpyrifos