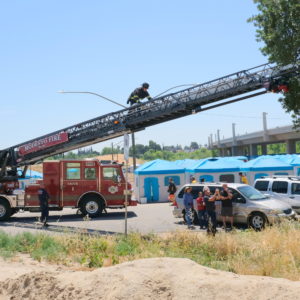 Ordinarily, Modesto Police Sergeant Mike Hammond has more pressing things to do than rescue cats. But Friday, May 2, Hammond was the only uniformed person in sight when a persistent cat lover kept urging him to do something about a treed cat near the entrance gate to the Modesto Outdoor Emergency Shelter (MOES), near Modesto’s Beard Brook Park.

Hammond looked at the cat, some thirty feet up a sturdy oak tree, then looked for an easy way out. The oak didn’t have any real access points, not even for a good climber. The lower branches had been lopped off long ago.

The time-honored method of coaxing the cat down with an open can of tuna was out of the question because its leash had gotten tangled in the oak’s leafy branches.

“Have you called for help yet,” said the cat lover. “You better call the Fire Department.”

Hammond sighed. The last thing he wanted to do was call out the Fire Department for a treed cat. He looked again. Even a long ladder probably couldn’t reach it, and it would still have to be untangled. He sighed again. Then he called. 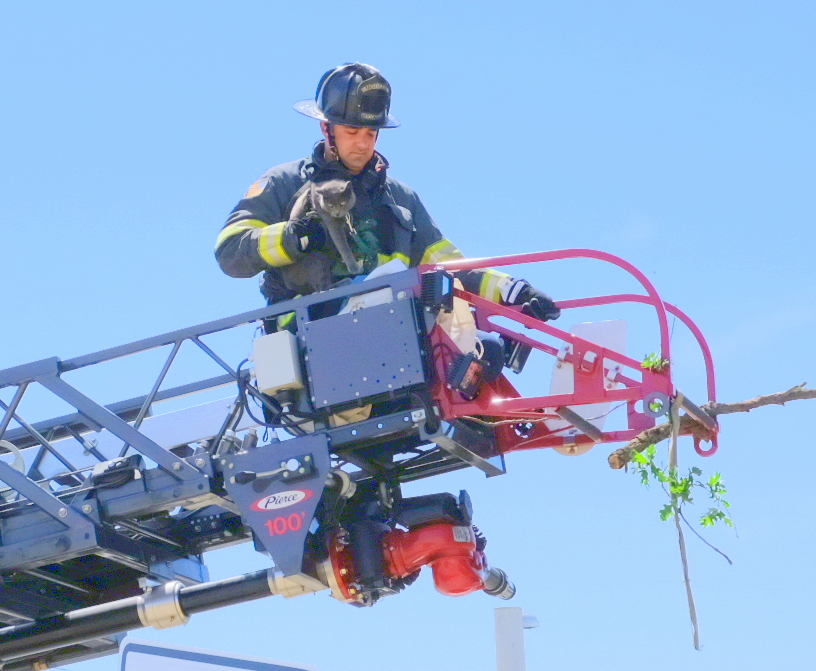 Most everyone agrees that the last time Modesto Fire Department came to MOES, they got there fast. That was good, because a couple of tents had caught fire and people nearby were hearing explosions. Not only did the fire department arrive quickly—some people said within five minutes—they got the fire out in what seemed like record time.

Once again, Modesto firefighters were on the job in minutes. After a quick evaluation of the cat’s precarious predicament, they pulled up their big truck and extension ladder, then sent in the crew’s best cat wrangler.

Though he carried a cloth sack to confine the cat in case it struggled and fought, the firefighter didn’t need it.

“That cat must have been ready to come down,” said the firefighter. “It walked right into my  arms.” 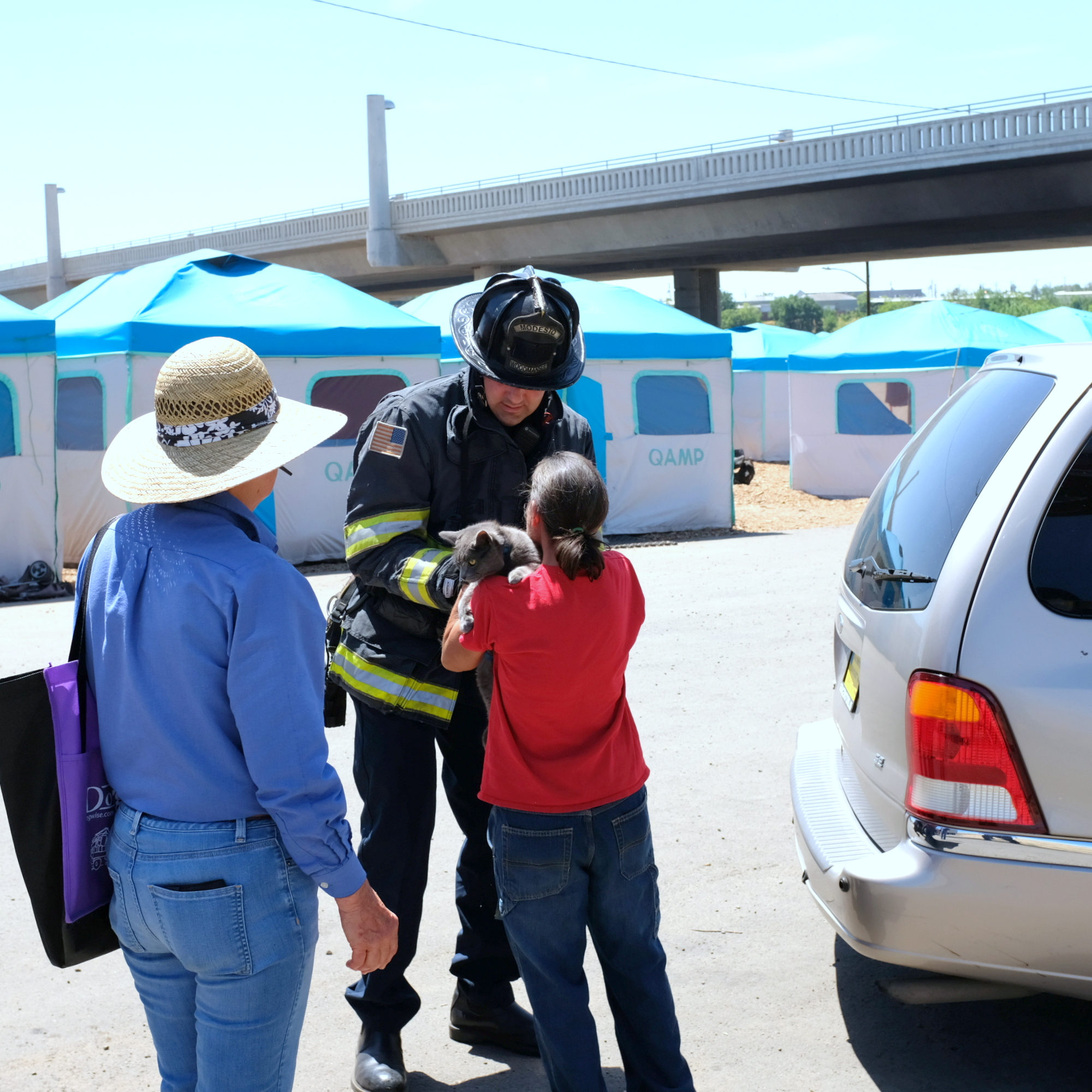 It probably helped that the firefighter didn’t even attempt to untangle the cat’s leash at first. Instead, he just broke off the small branch that had entangled the leash and untangled it after the cat was secure in his arms.

One observer said the cat had run into the tree after it was chased by a dog. Whatever the reason, once it got tangled up, the cat couldn’t have made it down without help.

Some of the people at MOES said that the cat’s owner, Sherry Lopez, has a couple of cats and loves them dearly.

“Those cats mean everything to Sherry,” said one woman. 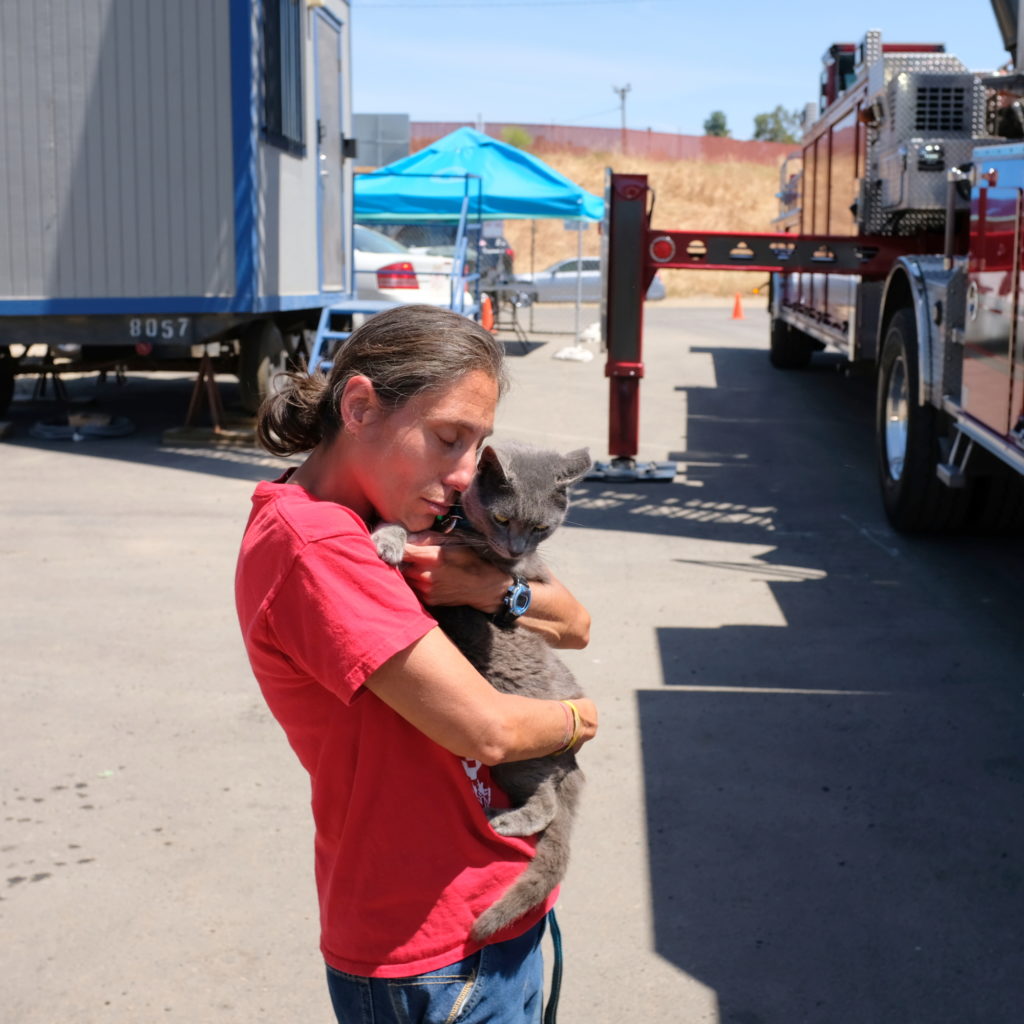 Sherry herself didn’t say much while the cat was up the tree. She just looked on helplessly as a kind stranger pleaded the cat’s case. But she was obviously thankful when a kind firefighter brought her pet and placed it in her arms.

“I was really scared,” said Lopez later, “but Rianne went right to the fireman.”

Sherry said her cat is named after her grandmother, who is also a resident at MOES.

Having a pet is just one of several benefits of having a place to stay for Sherry Lopez, whose story, like many MOES residents, is murky. Some say she wandered away from  home years ago. Lopez herself says that up until she came to Beard Brook Village last fall, “We were living under a bridge.” Last year, she was seen frequently along Modesto’s South 9th street, often sweeping the street with a straw broom.

Lopez says she feels a lot safer since she’s come to MOES, where people can watch out for her and her pet. And she’s especially thankful for the kind firefighters who took time to rescue a creature so dear to her heart. It was an act of kindness Sherry could never have seen when she lived under a bridge.