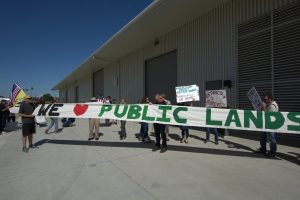 The tour continued in September, when Fresno Republicans had their own fundraiser featuring Joe Arpaio, self-designated as, “America’s toughest sheriff.” This Friday and Saturday, sagebrush rebellion superstar Ammon Bundy appeared at Modesto Junior College, brought in by prominent local Republican John Duarte, owner of Hughson’s Duarte Nursery. Together, the three amount to an “ABC” of evil in a region where Donald Trump’s minions have an iron grip on political leadership.

An octogenarian sadist, steeped for decades in the twin toxins of racism and xenophobia—a man who put prisoners in pink underwear and tents where the temperature rose to 145 degrees— Joe Arpaio is Donald Trump’s kinda guy; in fact, Trump spared the nasty sheriff a jail term last August, when he bestowed him with a full pardon for his criminal contempt case.

Like Trump, Arpaio has a long history of litigation and losses. The U.S. Department of Justice has ruled that Arpaio’s office had the worst cases of racial profiling in United States history; the office subsequently paid over $146 million in fees, court awards, and settlements.

Also like Trump, Arpaio was a big draw in a valley that far too often rewards its migrant workers with low pay, constant fears of criminal prosecution, and routine contempt. Last September, Fresno Republicans paid $70 a head to listen to Arpaio’s hate rants. VIP seats were offered at $1500 per group of ten.

Ammon Bundy’s Modesto Junior College (MJC) event was a more modest affair. Bundy’s pitch to exploit public lands by overgrazing and stiffing the government on use fees has less traction in a region that has replaced much of its grazing land with almond trees. Moreover, valley cattle ranchers tend to use their own land for grazing, though some move their cattle to public lands on a seasonal basis.

Though it was hard to separate Bundy supporters’ vehicles from those of protestors, a rough count appeared to limit paying customers to around forty cars and trucks for Bundy’s $75 per person appearance. A few non-paying Bundy supporters showed up flying flags and bearing signs; they wanted to show their support, but not to point of shelling out 75 hard-earned bucks.

Retired Modesto Junior College Professor Lillian Vallee joined protestors from the Center for Biological Diversity and said she was “dismayed” at Bundy’s appearance at her former workplace. She added that she has the “highest respect” for employees of the U.S. Fish and Wildlife Service and others who protect public lands.

“Here in the valley,” she said, “public lands are the only places that protect natural diversity. What’s at risk when people destroy nature is the complexity of life. I’ve become a student of biomimicry, which is the study of sustainability through the study of nature. But we can’t learn from nature if we destroy it.”

Vallee showed up to support protestors who met outside the MJC Ag Pavilion, chanted, “Keep public lands in public hands,” and waved signs with slogans like, “Extinction is forever,” and, “Lawbreakers go home.”

If Bundy has been a point person on the sustained assault on public lands that culminated in Ryan Zinke’s appointment as Secretary of the Interior, Ann Coulter represents the apex of celebrity Trumpism.

Recently appearing angular and almost anorexic, Coulter has begun to resemble something that came to life out of Pablo Picasso’s flirtation with cubism. But if anyone can take credit as the demiurge who dredged Trump up out of the swamp of tabloids and reality shows and into the hearts of the Republican Party, it is Ann Coulter. Long a favorite of white supremacists, devotees of hate speech, and foil-in-the-hat conspiracy theorists, Coulter is today what passes for the guiding intellectual spirit of the Republican Party.

Like Rush Limbaugh and Michael Savage, Coulter has learned there’s money to be made from hate, anger, and their associated “isms.” Under the cover of the First Amendment, Coulter has made a career of racism, sexism, isolationism, jingoism, and all the other toxic elements of Trumpism.

Recognizing a fellow opportunist of the rude, crude, and vulgar, Coulter jumped on the Trump bandwagon early on. Today, however, she’s ripping him for caving on the Republican budget and falling behind on his promise to build a wall.

Like others who thrive only insofar as they are outrageous, Coulter has to constantly up the ante. When the perilous times after 9/11 called for moderation and restraint, Coulter said of Muslims at a Town Hall meeting,

“We should invade their countries, kill their leaders and convert them to Christianity. We weren’t punctilious about locating and punishing only Hitler and his top officers. We carpet-bombed German cities; we killed civilians. That’s war. And this is war.”

Stanislaus County Republicans paid Coulter $25,000 for a live sample of her racist rhetoric of hate. Tickets started at $125, and went upward from there; Republican organizers said they sold 600 tickets. 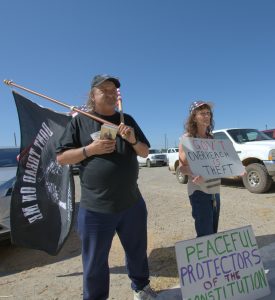 Arpaio, Bundy, and Coulter represent Trumpism at its zenith. All three flout law, civility, and America’s most sacred values and institutions. Theodore Roosevelt’s genius in establishing public lands for the public is under a sustained assault not just by Ammon Bundy and his posse of deadbeats but also by Trump and Secretary Zinke.

Trump and Coulter routinely vilify America’s immigrant heritage, while Arpaio represents Trumpism’s contempt for rules of law and equal justice. In all, the three celebrity Trumpers are blatant symptoms of a pestilence that has swept through the San Joaquin Valley like one of its historic floods.

For those who remember the Valley before Trumpism, it’s especially difficult to bear the degradation of the civility and humanity that once characterized Valley leadership. Moderate Republicans have gone extinct, replaced by extremists who recall the worst aspects of America’s McCarthy era. Courageous and benevolent Republican presidents like Dwight David Eisenhower have been discarded in favor of an orange-skinned racist wearing a road-kill pompadour.

There is only one antidote to the poison spread by Trump and his ABCs of evil—Valley citizens with true American values need to replace the poison of Republican Red with a Democratic Blue Wave next November and beyond. A great nation and a great republic are in danger.