Jon “Bowzer” Bauman, formerly of Sha Na Na and currently President of the Social Security Works PAC, is on a whirlwind tour to support candidates who pass his social security litmus test. Monday, he was at Sabatino’s Ristorante in Modesto to extoll the virtues of Turlock’s Josh Harder, candidate for congress in California Congressional District 10.

“Josh impressed me the most of all the candidates during the primary,” said Bauman Monday, “You’ve made a wise choice.”

Bauman, best known for his “greaser” role in Sha Na Na, brought a super-charged talent to Sabatino’s outdoor patio, as he entertained an SRO crowd at the standup piano with selections ranging from Chopin to music from the Sha Na Na television series. The Chopin may have been a surprise to those who knew him only as “Bowzer,” but Bauman said his love of music began at age seven and was cultivated at New York’s Juilliard School of Music, which he entered at age twelve.

Bauman’s passion these days is the preservation of Social Security and Medicare, which he feels are under serious threat from Donald Trump and the Republican Congress. “Josh Harder answered every one of our questions with a ‘yes,’” said Bauman. “Jeff Denham votes wrong on everything.”

Bauman reminded the audience that in 1935, before the establishment of Social Security, over half of the nation’s senior citizens lived in poverty. He said that even though his mother had been a New York City librarian, she would not have been able to live nearly as well in old age without Social Security, partly because of the early death of his father.

“It’s really a matter of independence and dignity,” he said. “We have to protect those things.” He said he’s supporting candidates who vow never to refer to Social Security as an “entitlement.” 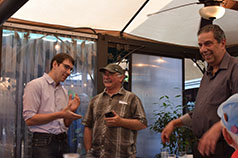 “Social Security is not an entitlement,” he said, “it’s something we work for and earn.”

Harder said that preservation of Social Security was a priority for him, but he added that District 10 needs to address many other concerns as well, including jobs, immigration, and health care. Harder’s biggest announcement surprised most everyone; he said a recent poll showed him and Jeff Denham in a dead heat.

The poll of 501 local voters was conducted by the Garin Hart Yang Research Group and showed Harder and Denham locked at 48% each. Only four percent expressed no preference.

Though he was encouraged by the poll, Harder said, “This election is going to be very close; it’s going to be decided by hundreds of votes. That’s why we’ve got to knock on every door and talk to every person to get our message out.”

“That’s just one of many myths about Social Security,” said Bauman. “Social Security is fully funded through 2034, but there are lots of ways to attack it.” Bauman said one way to do away with Social Security would be to push through a balanced-budget amendment, which would force the government to take Social Security funds to balance the budget.

“That’s why I’m on this tour,” said Bauman. “We don’t need just to protect Social Security, we need to expand it.”

Josh Harder added that he sees more and more senior citizens moving from place to place just because they can’t find affordable housing. “We need qualified people in government, especially in places like Housing and Urban Development,” said Harder. “Ben Carson’s only qualification for a position involving housing is that he lives in a house.”

Harder promised to work in congress to address the stresses on our economy caused by rising costs and stagnant incomes. If Jon “Bowzer” Bauman has anything to say about it, Harder would have been in congress long ago.

“All I can say about Jeff Denham is something I said in a movie during a limbo contest,” said Bauman, “How low can you go? Denham gets a zero on our Social Security scorecard; you can’t go any lower than that.” Judging from the line that formed for autographed photos after the event, the Bowzer and his message are more popular than ever.