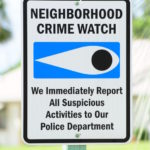 The City of Modesto has an informal goal of having 1.8 police officers for every thousand citizens. The goal is based on the national average in 2002. Modesto has not met the goal since it was established. Given the present staffing level, the police need the help and cooperation of citizens.

On April 3, 2012, the Woodland West Neighborhood Association held a neighborhood watch meeting to discuss problems and solutions for the area. About 70 citizens attended, voicing problems and listening to solutions provided by representatives of the Modesto Police Department and Stanislaus County Sheriff. The advice is useful for all neighborhoods.

The number of complaints from such a small area of the city was astounding. Citizens talked about car theft, petty theft, physical threats and extortion, and traffic problems including speeding, U-turns in front of schools, and excessive noise from car radios. Graffiti and vandalism continue to plague the area despite a concerted neighborhood effort to immediately paint over whatever is defaced.

The representatives from the Modesto Police Department and Stanislaus County Sheriff assured citizens that they are working constantly to catch evil doers. For maximum efficiency, the police need all citizens to report every illegal activity. They want license numbers of suspicious vehicles, police reports filed for all theft and vandalism, pictures of all graffiti before it is painted over, and any information that can be used to solve a crime. In other words, citizens have to work hard with the police to fight crime. Citizens don’t have to confront the criminals, but they need to be pro-active.

Police presence is one deterrent to crime. However, police can’t be everywhere at once.  Citizens have a greater presence. For example, adults should stand out in front of school when children are arriving and leaving to watch traffic and protect children. They can note dangerous drivers. At the neighborhood meeting, someone suggested that retired adults do such duty if they have time.

An active neighborhood watch is another deterrent to crime. If the criminals know they’re being watched, they will go somewhere else.

A lot of theft and vandalism occur in the wee hours of the morning, when most citizens are asleep. Must we post 24 hour guards in our neighborhoods? Criminals often case homes during the day. By noting the license of a car with suspicious occupants, leads can be generated if a crime occurs later. If a dog barks late at night, it’s wise to see why he is barking.

At the Woodland Neighborhood citizens meeting, several residents expressed frustration over the apparent lack of response to complaints filed with the police department. People living within county pockets surrounded by the city voiced similar feelings. Modesto Police Lieutenant Craig Gundlach said that all crime reports are reviewed and  the police try to respond as time permits. If a citizen does not receive a response, there may be nothing to report. Sometimes the police are so busy that there isn’t enough time to follow up.

Sometimes, citizens can’t tell that the police department has responded to complaints of suspicious persons or vehicles because the department often sends out unmarked vehicles to check the complaint and doesn’t normally contact the original caller to report findings. Lieutenant Gundlach also told the crowd at the neighborhood meeting that when someone calls 911, police respond in the same way that a hospital triages patients. The most urgent calls get attention first.  Officer Gundlach said that a response can be in as little as 30 seconds when conditions are optimal, but that does not happen too often. He also said that when in doubt, call 911. He would rather have a 911 call routed to dispatch for routine response than a report of an urgent problem delayed because a citizen was afraid to use 911.

Crime Prevention Officers Carla Castro and Heather Graves said that best action citizens can take is to file WRITTEN complaints and make the calls to the police department when needed. “The squeaky wheel gets the grease,” said Sheriff’s Officer Rodney Goetano. When police receive multiple complaints, they divert additional resources to deal with the problem, increasing the chance that a criminal will be caught.

Listening to a description of police operations, one concludes that if citizens work in partnership with the police, the entire community will be better served. If citizens ignore problems, the problems will only get worse. Crime thrives in the absence of citizen involvement in the well-being of a community.