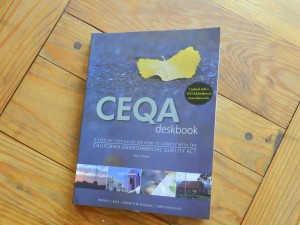 In 2011, we posted a review of some of the most successful applications of the California Environmental Quality Act (CEQA) in the northern San Joaquin Valley. These cases show that CEQA can be an effective planning tool in our region.

Unfortunately, because CEQA almost always involves an understanding of environmental law, attorneys’ fees have too often put CEQA review out of the reach of the public citizens it was intended to serve.

According to the California Department of Fish and Wildlife, CEQA includes the following goals:

Disclose to the public the significant environmental effects of a proposed discretionary project, through the preparation of an Initial Study (IS), Negative Declaration (ND), or Environmental Impact Report (EIR).
Prevent or minimize damage to the environment through development of project alternatives, mitigation measures, and mitigation monitoring.
Disclose to the public the agency decision making process utilized to approve discretionary projects through findings and statements of overriding consideration.

Another important function of CEQA is to encourage public review of projects involving public agencies and resources.

On those occasions when CEQA review is triggered, the greatest public benefits occur when interested parties follow the process closely. Some citizens worry about confusion caused by obscure legal references, but they should remember that one requirement of CEQA is that the decision making process be communicated in layman’s language.

Just last week, the Oakdale Irrigation District (OID) was notified that it should have performed a CEQA review prior to approving a controversial fallowing program. Almost at the same time, the OID Board of Directors considered notifying landowners around Tulloch Lake that the lake will most likely be drained for agricultural needs resulting from the ongoing drought.

These paradoxical actions are the very sort that benefit from public review. If selling water outside the district impacts residents around Tulloch Lake, or if a fallowing program results in significant less recharge of groundwater, people need to know how and why. They also benefit when alternatives and mitigation measures are offered for public consideration.

Thus far, OID management claims water sales and fallowing are unrelated to threats to Tulloch Lake water supplies. OID management and Directors also claim the fallowing program will conserve water, but seem not to have taken into consideration that fallowing and subsequent conversion to permanent crops will increase stress on local aquifers.

Are there alternatives to draining Tulloch Lake? Will the fallowing program increase stress on local aquifers? If so, people need to know. CEQA review is the best way to find out.