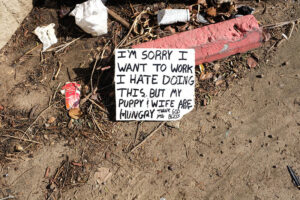 According the United Way’s Real Cost Measure, 31% of Stanislaus County families struggle to meet costs for food, rent, and clothing. Like most households throughout the state, the cost of housing is the primary factor in their inability to make ends meet. Research by the United Way reveals that, “Struggling households in California use over half of their income on housing, more than twice as high a share as households living above the Real Cost Measure.”

Living precariously on the thin edge between poverty and homelessness, these already vulnerable families have recently had to shoulder the added burdens of an enduring pandemic and runaway inflation. Nonetheless, families like these are the g0-to option for relief when cities face shortages of funding — an unintended consequence of our nation’s decades-old, anti-tax myopia.

America’s tax revolt began in California with Proposition 13, officially known as the People’s Initiative to Limit Property Taxation. Enacted in 1978, the proposition has been touted as a huge benefit to property owners throughout the state, despite burgeoning loss of revenues for cities and counties. One of the lesser-known side effects was a de facto establishment of minority rule; Proposition 13 requires a two-thirds majority in both of California’s legislative branches for increases in tax rates of any kind, including income tax rates.

Loss of property tax revenues has thus been a major factor in funding shortfalls for many California cities, especially in the San Joaquin Valley. Ironically, California itself has recently had huge budget surpluses, due in large part to a booming tech economy.

Nonetheless, California cities such as Modesto still find themselves strapped for funds. Modesto’s case is especially instructive because it’s located in Stanislaus County, which has a General Fund surplus — over $250 million on an annual budget of $400 million.

Ordinarily, part of that surplus would help fund Modesto’s ongoing deficits. Instead, Stanislaus County Supervisors have treated the county budget as a savings and investment bank, ignoring urgent needs in favor of growing the bottom line. As a result, like many other California cities, Modesto has resorted to regressive taxation in the form of sales tax increases in order to fund its deficits. Its latest proposal for an increase was announced January 13.

Modesto might have had better luck with acquiring funding from Stanislaus County were it not for poor representation. The seat for Supervisor’s District 4, which encompasses most of Modesto, has lately become a retirement home for Republican politicians far past their prime.

The winner of the 2018 election was Tom Berryhill, an ailing career politician who was too ill to campaign; nevertheless, large expenditures of money and enthusiastic endorsements from incumbent supervisors pushed him to a win. He died in office shortly thereafter.

Prior to Berryhill’s short term, the District 4 seat was kept warm by Dick Monteith, an affable man with an iron constitution who faithfully showed up for awards ceremonies, fund raisers, birthday parties and ribbon-cuttings, but showed little interest in the material needs of his constituents. He retired from the board aged 85.

After Tom Berryhill died, Governor Gavin Newsom appointed Mani Grewal to fill his seat. A former Modesto City Councilmember, Grewal is keenly aware of Modesto’s financial needs. He’s also far more energetic and ambitious than either of his predecessors on the board, all of which makes one wonder why Modesto’s Mayor and Councilmembers haven’t sought him out for help with their budget shortfalls.

Even though Stanislaus County is flush with money and has shortchanged the City of Modesto for years, the city’s first option is a regressive sales tax, a source of funding that disproportionately punishes people already battered by stagnant incomes, rising rents, runaway inflation and a pandemic that won’t go away.

Sales taxes can be a deceptively easy sell because they creep up in increments of cents and half cents. Nonetheless, over time they add up to a heavy burden for people one emergency bill away from financial ruin. They’re a stopgap measure that never ends.

Poor people don’t help fill campaign coffers; as a result, they have few advocates and fewer representatives. Nonetheless, in a city plagued by a spreading infection of poverty and ruin, rising numbers of homeless people, and the growing despair of middle-class workers falling farther behind on their rent, Modesto’s voters should realize that the harms of regressive taxation affect everyone. The bill comes in the form of urban blight, rising crime, and bodies on the sidewalks.

Rustling around for the few remaining pennies in the pockets of the poor when your wallet is stuffed with money isn’t just unjust, it’s also unwise.