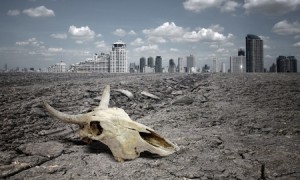 Until last year, California was the only state without regulations for pumping groundwater. Many thought new rules would remedy problems brought about by overdrafting. They overlooked the fact that even in states with groundwater regulation, major aquifers have been depleted beyond recovery in any reasonable time frame.

The great Ogallala Aquifer, which covers parts of eight Midwestern states, has been severely depleted. In Kansas, one study estimated that in order to achieve true sustainability for groundwater, farmers would have to reduce pumping by 80 percent. The Colorado River Basin is also nearly drained. Recovery won’t happen for decades, if ever. Both the Colorado River Basin and the Ogallala aquifer are in states with groundwater regulation.

Though sustainability is the key word in California’s new Sustainable Groundwater Management Act (SGMA), many observers think groundwater in parts of the state is already stressed well beyond recovery. The epicenter of well failures in the San Joaquin Valley is Tulare County, where the most recent count stood at 1491 dry wells; the tally increases almost daily. The drought has only accelerated what was already a severe groundwater deficit.

Tulare County was one of the earliest sites for industrial agriculture. The Boswell and Salyer corporations perfected agriculture on a grand scale and in so doing managed to exhaust all nearby surface and groundwater resources. The result was salty soil, ground subsidence, and an increasing thirst for water from up north.

By the time the current drought came along, the state had five times more demand for water than it could deliver. The problem was compounded when farmers both big and small began planting permanent crops like almonds and pistachios in lieu of row crops. Whereas land for row crops can be fallowed in dry years, permanent crops need constant supplies of water every year.

When the groundwater crisis escalated, many hydrologists thought the sensible first response would have been to calculate a “mass” water balance region by region. Mass balance equations offer rough estimates of sustainability using a “water-in minus water-out” formula in part based on the geology of aquifers in a given region.

Resistance to mass balance calculations was widespread. One of the most common responses was, “we need more data.” Even though the water needs of crops have been calculated almost to the gallon, regional leaders claimed to need more pumping data. And even though the state has hundreds of monitoring wells and the geology of most regions is fairly well understood, the cry went out for more studies.

Anyone familiar with groundwater depletion nationwide shouldn’t need much reflection to comprehend why the only call for mass balance studies has come from scientists. Reliance on groundwater for large-scale permanent agriculture is unsustainable on the face of it. Mass balance studies would only confirm this fact. Absent reliable access to surface water, groundwater sustainability can be achieved only with a reduction in demand.

In the San Joaquin Valley, demand can be reduced on a large scale only by retiring agricultural acreage—lots of it. The economic hit would be devastating. Nonetheless, failure to reduce demand will result in depletion of groundwater resources entirely.

Despite SGMA, California is reacting to overdrafting of groundwater in much the same way other states have: It’s deferring action that would address real causes and using public resources to mitigate problems due to failed domestic wells on a case-by-case basis.

Absent sustained public outcry, the outcome will be the same as it’s been elsewhere; that’s why it’s virtually inevitable that wells in and north of Tulare County will continue to fail and groundwater levels continue to drop—features coming soon to a well near you. Expect the public to pay both ways—via loss of an irreplaceable public resource as well as by shouldering the financial burden both for short-term remedies and long-term devastation.