When Modesto Poet Laureate and MJC librarian Stella Beratlis heard that her first book of poetry (Alkali Sink, Sixteen Rivers Press, 2015) had been nominated for that year’s Northern California Book Awards, she admitted recently that she was, “totally floored— because in my wildest dreams where I allowed myself to imagine how my book was received, a Northern California Book nomination was the pinnacle. So it was surreal when I heard the news.”

The prestigious nomination confirmed the high regard that her colleagues had long held for Ms. Beratlis and her superb poetry. While she had been writing poems since childhood, it took a little nudging from her best friend, Gillian Wegener, for her to take the craft more seriously, more than a dozen years before the publication of Alkali Sink.

“About the time my daughter Demi was born, I got involved with a poetry group, the “Licensed Fools,” at the urging of my best friend, Gillian,” Ms. Beratlis recalled. “I had shown her some poems and she said ‘Oh, my God, these are so good! You’re a great writer—you have to join our group!’

Gillian was already so accomplished by then, and I was amazed that she thought my writing was worthwhile. By then, I was in my mid-thirties. I started reading poetry, and thinking about it, and paying more attention to my writing. I’ve been writing ever since on a pretty regular basis.”

In a life that saw Stella Beratlis move several times early on to different parts of the country, the Central Valley has been at the center of that life far more than she would have anticipated when she was younger.

“I grew up in the East Bay, in Pleasanton, in a Greek-American family,” Ms. Beratlis recounted.  “I grew up bilingual, speaking both Greek and English in the household.”

“Later on, my mom and dad got divorced and I went with my mom and step dad and we moved to Modesto. We came to the Central Valley in the late 1970s. I graduated from Beyer High School. I went to college for three years, got involved with the college radio station, but didn’t really know what I was doing, except enjoying the radio station and being a DJ. I ended up dropping out of UC Davis and went to work for Tower Records in San Francisco.”

Following job assignments with Tower that took her to New Orleans, then Boston,

“I realized I wanted to finish my college education because I didn’t really see myself working in retail management for the rest of my life. Something compelled me to move back to the Central Valley and Modesto and I finished my degree at California State University, in Turlock.”

In recent years, Ms. Beratlis has served as a public librarian, with the San Joaquin Public Library in Tracy, and now as an academic librarian with Modesto Junior College, a position she took in 2017. She views poetry as one of the portals through which the MJC library can reach out to the wider community. 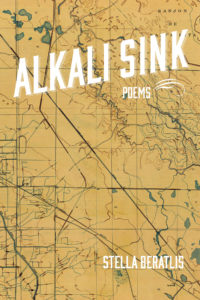 “I really love my work,” Ms. Beratlis remarked. “I’m inspired by supporting people in their quest to have information that helps them make informed decisions and helps them be engaged civically in our country and community. Poetry readings are a way of bringing people together, and we’ve held two readings here so far. So my vision is to highlight the connections of poetry with activism and civic engagement. Just this past February, the library partnered with the Black Student Union and had a reading called Words Worth Speaking, which featured a couple of spoken word artists.  We shared information about how to support diversity on campus.

Of course, with the pandemic, we are now fully remote as a campus, so I’ve been trying to figure out how to do poetry readings online without it being another Zoom meeting. I am a big believer in civic engagement. I’ve been involved with the League of Women Voters for a long time, and I’ve been a member of the Friends of the Modesto Library. I’m a library advocate. Back in the 1990s there was a campaign to get a sales tax passed to fund the library. I worked on that. The League is a great group to belong to—I couldn’t ask for a better group of women and men with which to do this work. Right now, I’m the web master. I love the candidate forums that they present, the pros and cons that we do for the community.”

With a second volume of her poetry due to be published by Sixteen Rivers Press in April 2021, Ms. Beratlis is hard at work on that new manuscript.

“I’m still tinkering with the manuscript,” she noted.  “I’m using as a muse Hazel Houser, who was a singer-songwriter in Central Valley bands; her family came over during the Dust Bowl years. I’ve written three poems about her, and I’m currently revising other poems because her voice is peeking out around the edges of some of them, so I want to make it more obvious that she’s there.”

Reflecting on what the Central Valley means to her, Ms. Beratlis said,

“When I was younger, the idea of settling in the Central Valley seemed like such a compromise. But I finally realized how misguided that notion is. There is definitely a beauty here, a feeling that I don’t get anywhere else. And my family is here, my mom and sister, and my daughter, dad, and grandparents, and of course, my amazing friends. It’s the most supportive community ever. That’s what makes a life.

Even when I younger, when I was driving into Modesto and coming off the Altamont down into the Valley and through orchards I realized there is nothing like this. This place always calls to me, even when I’m gone. We have a lot of opportunities to do good here. I’m going to do things that make this a place where I want to live.”

Stella Beratlis is Modesto’s current poet laureate. Her work has appeared in Harbor Review, Posse Review, California Quarterly, Song of the San Joaquin, Quercus Review Press, and in the anthology “The Place That Inhabits Us: Poems of the San Francisco Bay Watershed.” Her collection Alkali Sink was a 2016 Northern California Book Award nominee. Her second book-length collection of poems is forthcoming from Sixteen Rivers Press in 2021.