Congressman Josh Harder arrived in Turlock “around midnight” last Thursday, not long after pushing hard in Washington DC to assure Valley farmers received their share of financial relief from hardships imposed by the effects of the Covid-19 on the economy. Some farmers have lost food contracts with schools and seen reduced orders as the result of widespread reductions in demand from restaurants.

Prior to Harder’s bipartisan efforts, farmers had been excluded from the Small Business Administration’s Economic Injury Disaster Loan program. Harder and his colleagues in Congress, both Republicans and Democrats, made sure farmers were included in the program.

Harder was in his district to help distribute much-needed face masks and plastic visors for health care workers in San Joaquin and Stanislaus Counties.

“No health care worker anywhere should have to be afraid to go to work because they don’t have proper safety equipment,” said Harder, while at the Stanislaus County Office of Emergency Services in Modesto Friday afternoon.

Harder and his team of volunteers and staff members dropped off 10,000 masks and plastic visors in Modesto, out of a total of 30,000.

“We were going to do a 50-50 distribution,” said Harder, “but people in Stanislaus County said San Joaquin needed them more, so San Joaquin got more. I’m really proud of the way people here have stepped up, people like Gallo, who put hand sanitizers into production right away and got them into the right hands.” Modesto’s Enviro Tech Chemical Services has also produced and donated hand sanitizers in response to the crisis.

California as a whole has managed to dodge the worst effects of an invisible pestilence that has ravaged populations in Spain, Italy, New York and New Jersey. And just when it seemed as though the disease might have been confined to mostly urban areas, there’ve been new outbreaks in meat packing plants, prisons, and nursing homes all around the nation.

California almost certainly has benefitted from the leadership of Gavin Newsom and San Francisco Mayor London Breed, who shut things down and imposed social distancing far earlier than governors and mayors elsewhere, many of whom are still engaged in debates about the severity of a plague epidemiologists have said is a global threat to millions of human lives. 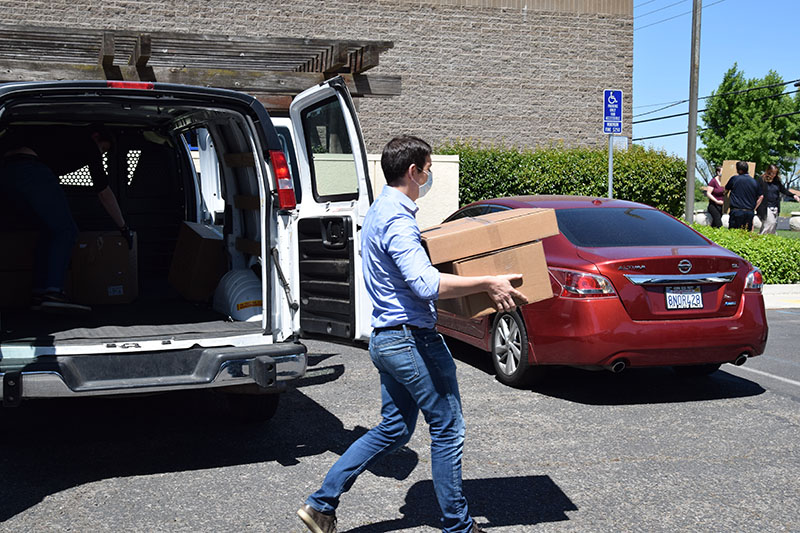 Like Newsom and Breed, Harder prefers to move proactively rather than wait for the death toll to grow. He got the masks and visors from DonatePPE a nonprofit committed to distributing PPE during the pandemic. Last week, Harder announced a partnership between the Central Valley PPE Initiative and Print to Protect, a coalition using 3D printing to produce PPE for California counties.

“We’ve done a good job,” said Harder of people in his district, while he unloaded boxes of PPE from a rented panel truck, “but we’re not there yet. We’ve still got a lot of work to do.”