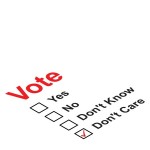 Citizen participation seems to be declining in Valley elections. While some states are passing laws to make it more difficult to vote, California’s effort to encourage voting through more liberal laws hasn’t worked; fewer voters are voting in almost every election. Voter registration in conjunction with automobile registration has made it easier to register. Voting by mail has made voting more convenient. But neither initiative has increased turnout percentages.

Of Stanislaus County’s 521,000 residents, 211,277 are registered to vote. Tuesday’s voter turnout was under 17 percent. To win an election, about seven and one-half percent of our citizens need to be persuaded to elect someone within a district to national office. No wonder a small voting block can control local politics!

A proposal was floated at a local coffee klatch the other day to impose fines for not voting, as is done in at least one country in Europe. The response from one of the attendees was “if such a law is passed, I will simply cast a blank ballot with no marks on it.” You can lead a voter to a ballot, but you can’t force him to mark it!

Members of the coffee klatch wondered whether the law can be changed to make voting even easier. One suggestion was to change Election Day to a Saturday or Sunday. The consensus was that people won’t vote on the weekend because of their weekend activities. The day the election is scheduled doesn’t matter. People won’t vote if they don’t want to.

How about the following brilliant idea? Instead of having people vote at their precincts, send the ballot out 30 days in advance of Election Day to all registered voters. When the voters complete their ballots, have them take the ballots and deposit them at the local grocery store or let them mail the ballots in. Everyone goes to the store once a week, so if people can remember to take the ballot to the market, they can drop the ballots there. The consensus was, why should any additional effort be made to hand hold voters? Either they vote or live with the consequences of the election.

Why Are Voters Apathetic?

The possible explanations for the failure to vote are small compared to the number of excuses one may hear. The average potential voter thinks that his or her vote won’t make a difference. Failure to vote will have little effect in the scheme of things. In reality, elections have been lost and won by as little as one vote.

The average voter feels that there is no one worth voting for. Unless the candidate is a friend, has the ability to deliver a direct benefit to the voter, or the candidate’s opponent has angered the voter for some reason, the voter may feel that voting is of secondary importance to other activities such as taking the kids to soccer or watching television.

Many voters think all politicians are dishonest. Therefore, why vote when winners will steal from taxpayers anyway? This attitude comes from a multitude of sources including television news, attack ads, and bland candidate platforms that have no relation to what a voter experiences in the real world. When candidates for office focus on subjects of disinterest to the electorate, voters may not feel compelled to vote. People prefer to have someone to vote for rather than against someone. When candidates heap mud on each other, voters don’t know who to vote for and eventually decide not to bother.

The fact that such a small percentage of the adult population in the Valley votes suggests that negativity has been going on far too long. News media and the candidates need to elevate the conversation so that voters will feel motivated to participate in the election process.

Over the years, we’ve heard repeated complaints from voters that our government is mediocre. If government has become mediocre, it’s a reflection of the candidates who run for office and win.

In a recent election about imposing a sales tax increase, the Modesto Bee editorialized that the entire Modesto City Council cannot be trusted to spend money wisely. If this is true, then more trustworthy candidates need to run for office. But what citizen who values his reputation is going to run for office if he knows that mud will be heaped on him during the campaign or while in office? If voters don’t care enough about the community to vote, why would anyone put his reputation on the line to run for office?

Some people benefit from voter apathy by getting special favors from their elected cronies. The favoritism is easily spotted in the subsidies and special treatment certain individuals and interest groups receive. The subsidies and favoritism corrupt the government. This problem is nationwide. The Valley is a small part of the big picture.

The prognosis isn’t good. As gridlock paralyzes the U.S. Capitol and mediocre legislation harms the local economy, either the voters will need to revolt by sending better representatives to public office or the economy will collapse under the weight of growing corruption. Low voter turnout may be a symptom of the corruption; it’s certainly not a cure.