“I want to work, but my hands hurt all the time. They hurt real bad,” says Alvaro Gayton, who’s been at Beard Brook Village in Modesto’s Beard Brook Park since last September.

Gayton’s last job was at a Modesto Restaurant specializing in barbecue and smoked meats. “I cooked all day and washed dishes at night,” he says. “I was the only one who really knew how to smoke meat the right way. Many people can barbecue, but smoking is a different thing.”

Alvaro and his wife have been in and out of drug programs for years. “I do best when I’m in a program and have a job,” he says. “I was clean for five years because I got in a good program with Nirvana and they really helped me.”

Gayton’s hands are red, swollen, and painful from arthritis and carpal tunnel syndrome. He says he can work a few hours at a time, but can no longer put in the long days he used to.

Because of the recent government shutdown, Gayton is worried about losing his food stamps, his only source for food other than donations at Beard Brook Village. He’s heard rumors there won’t be a food stamp payment in March, but isn’t certain why.

Because he has no income and no money, he’s been forced to scrounge for everything. He was living in Beard Brook Park even before camping was permitted. Once people were allowed to camp, he built a makeshift tent from discarded tarps.

“We had a four room tent, for a while,” he says. “I leveled the slope and made separate rooms. But then the storm came and knocked everything down, so I had to put up a different design.” 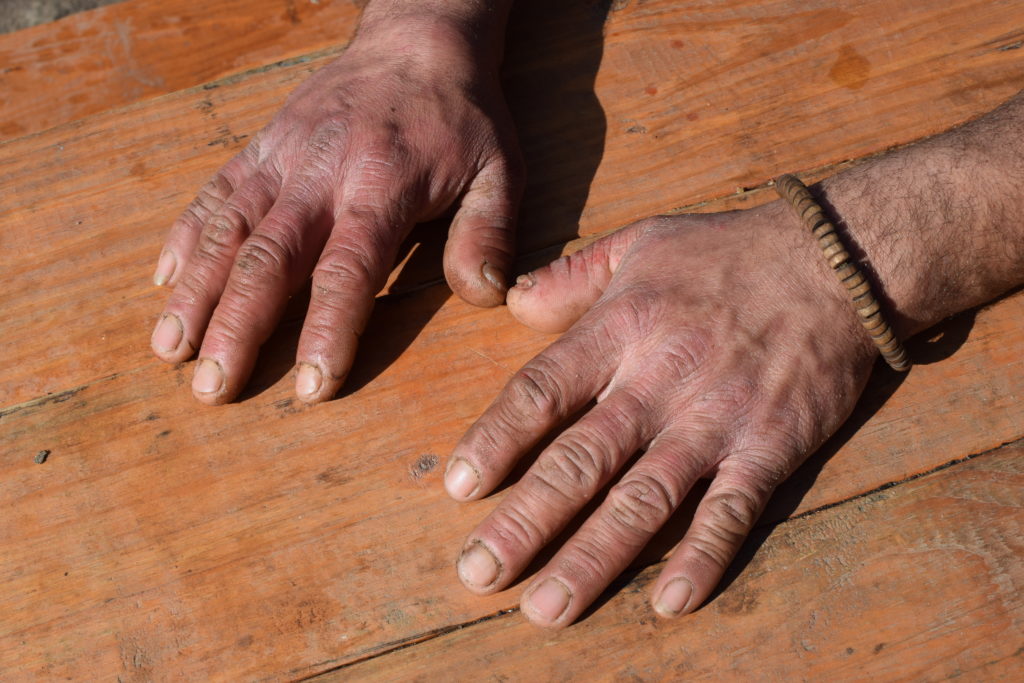 In an odd coincidence, one of the things he found while foraging was an abandoned smoker. Despite the heavy weight and bad wheels, he managed to drag it to Beard Brook. The smoker has become his prized possession.

“It’s the real thing, real cast iron,” he says proudly. “I love to cook and whenever I can I smoke meat and cook for people.”

Homeless outreach worker Randy Limburg is one of Gayton’s biggest boosters. “He’s a born worker,” says Limburg. “All he needs is some help and guidance.”

Limburg was a regular customer at Gayton’s former place of employment. “It’s a shame we can’t do more for people like Alvaro,” he says. “He’s a good person and is just having a hard time.” 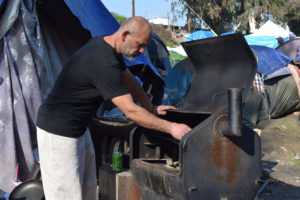 Without money or transportation, Gayton’s future looks bleak, but he’s hoping to get into another program if he can find one. He’ll be moving to the new location for people experiencing homeless and hopes he’ll be able to find work soon.

In the meantime, Gayton’s doing his best to avoid drugs and trouble, and using any opportunity he has to cook for others, including his special skills smoking meats. When asked what the secret to good smoking is, he says one important thing is the right kind of wood.

“Oak burns too hot,” he says. “If you want something to taste good every time, use almond wood. It’s the best.”