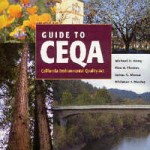 Today’s news that a group called Protecting Our Water and Environmental Resources (POWER) will sue Stanislaus County unless it revokes permits for wells on the county’s east side is very likely to change the rules about groundwater throughout the state. Attorneys for POWER are arguing the well permits are in violation of the California Environmental Quality Act. They have a strong case.

In June, 2011, we summarized some of the local benefits from the California Environmental Quality Act (CEQA). Though local media prefer to shroud CEQA in mystery, it’s the best tool we have to prevent environmental degradation and exploitation of public resources.

Despite a well-documented history of overdrafting, California is the only western state that doesn’t regulate groundwater. The lack of regulation is a classic case of the triumph of ideology over science. Even today, opponents of regulation continue to argue for a “free-market solution” to the impacts of overdrafting.

But the investigation of impacts of current use of groundwater is going to reveal a long list of facts that show we need regulation now. The fact-finding process will also show that the notion that we have unlimited rights to the water under our land is based on faulty science.

Virtually all water from lakes, rivers, and reservoirs is public water. That means that when private interests deplete the aquifer, they’re often doing so at public expense—they’re actually using surface water that has flowed horizontally under their land.

Overdrafting also causes subsidence and impaction, which result in huge costs from damage to infrastructure, reduction of soil permeability, and ruination of fertile soil. Once these facts are widely known, the public won’t settle for inaction on the part of public officials.

Attorneys for POWER are arguing that current use of groundwater results in,

“serious overdraft of the aquifer, possibly resulting in dry wells for existing well owners; adverse effects on flows in the Stanislaus and Tuolumne rivers, including downstream water quality issues; reduction of levels in surface storage facilities (like Woodward Reservoir) and contamination of groundwater supplies.”

The facts will show they’re correct in these claims, and further investigation will show that the inevitable results of continuous overdrafting are subsidence and impaction.

Opponents of regulation claim the magic of marketplace will provide solutions. The long history of ill effects from overdrafting will overwhelm their arguments. Stanislaus County Supervisor Jim DeMartini is well known for his willingness to face facts. “I think we should have dealt with this issue before we ever got to this,” he said in response to news about the lawsuit. He’s absolutely right.

Next: What science says about our water and soil