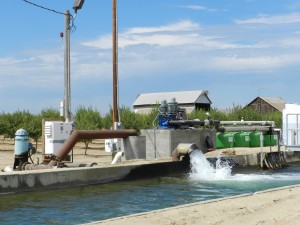 Especially since the drought extended through last year’s dry winter, you couldn’t write “groundwater” and “California” without adding, “the only state that doesn’t regulate.” The assumption was that California’s groundwater problems must be due to lack of regulation.

That assumption, however, fails against the realities of groundwater regulation in many states where groundwater woes are not unlike those in California. One such example is Texas, where large portions of the great Ogallala Aquifer are already useless for irrigation.

In fact, one study estimates the entire 3 billion acre foot aquifer, which covers 8 regulated states, could run out of water altogether in less than fifty years. Already in many of those states the water level is too far down for popular crops like corn; the costs of pulling the water up aren’t compensated for by the selling price of the product. So those who’ve been thinking regulation is the answer to groundwater problems in California really need to think again.

There are manifold reasons why groundwater regulation fails, and California will very likely become the latest state to learn the hard way that regulating groundwater is about as easy as trying to hold it in one’s hand.

An illustrative example is occurring in Stanislaus County, where a controversial Water Advisory Committee (WAC) meets every two weeks in an attempt to provide County Supervisors with guidelines for groundwater policy. There are several reasons why the WAC has made no headway in the many months of its existence; almost all of them reveal why groundwater regulations are more likely to fail than succeed.

When speaking of regulation, WAC members periodically cite lack of government manpower as one reason the state won’t even be able to monitor groundwater usage, let alone police violators. There simply aren’t enough government employees to address groundwater abuse, and the abusers know it. Thus, the tendency for local authorities is to make regulation look good on paper while ignoring violations.

Even the regulations themselves are often fouled by built-in flaws. The most evident primary problem is the beloved “stakeholder” process.

UC Davis Professor Jay Lund has written that one of the prerequisites of sound groundwater policy is to “keep stakeholders at arm’s length.” This is simply a variation of James Madison’s, “No man is allowed to be a judge in his own cause.” Nonetheless, as obvious as the truth of these admonitions seems, the stakeholder process tends to pervade groundwater decision-making, especially in the water-starved San Joaquin Valley.

WAC membership is dominated by a mix of well drillers and property owners with a vested interest in the status quo. Even when publicly silent, the voices of the large land holders speak loudly in the corridors of power. No one wants to alienate them, especially local politicians. Their mix of money and political power ensures regulations will almost always be to their advantage.

In addition to the inherent political and financial power of Big Ag, it has managed to surround itself with the sacred aura of “family farming.” This is an especially neat trick, given the manifold differences between Big Ag and the family farmer.

In Stanislaus County, whenever the focus is on foothills nut farmers and their thousands of acres of groundwater-dependent orchards, their apologists immediately turn to weepy narratives about heroic family farmers and fulfillment of the American Dream.

Despite stark differences among family farmers and the financiers and speculators who dominate Big Ag, it’s a successful ploy. In Stanislaus County, the differences between family farmers in historic Wood Colony and the “farmers” in the county’s eastern foothills make for a long list.

Wood Colony made national news when it was threatened with development from nearby Modesto. Whereas farms in Wood Colony are sized in the hundreds of acres, those in the foothills encompass thousands of acres. Wood Colony farmers belong to the Modesto Irrigation District and receive surface water from Sierra snowmelt. Their allotments are cut in dry years.

Farmers in the foothills are solely dependent on groundwater. The only restrictions they face are in the form of pumping costs. Foothills farmers use drip irrigation that contributes almost nothing to recharging aquifers. Wood Colony farmers favor flood irrigation. One U.S. Geological Survey study showed flood irrigation contributes more than half the recharge water to aquifers under Wood Colony and neighboring Modesto.

Some Wood Colony farmers are third generation. The well-known Wenger family can trace Wood Colony roots to 1910. In contrast, farming the foothills is a new venture. Many of the orchards are owned by investors and cover what was once rangeland.

Putting a halo around unsustainable Big Ag by associating it with sustainable family farming is only one of many successful tactics that enable pumping of groundwater until it’s gone. Other methods include intimidation, mythology, manipulation, and mystification. We’ll cover those in Part II.