December 16, the Los Angeles Times reported that The Supreme Court of the United States rejected a request for review of a lower court decision in the case of the City of Boise Idaho Versus Martin. The court let stand a ruling that homeless citizens are entitled to sleep on public property when a city has no alternative shelter available. Logically, for the good of every community, homebuilders must partner with government to build shelter to house each and every citizen.

In the Valley, the building industry has shown little inclination beyond self-serving activities. And the governments of the cities and counties have not made sufficient effort to insure the well-being of all constituents. The Supreme Court decision put local governments on notice of a need to change how the housing construction business is conducted.

Since the 1980s, Bay Area customers have been the primary target of local home builders. Ads placed in Bay Area media offer upscale homes in the Central Valley.

For example, Lathrop and Tracy homebuilders have been running ads for weeks on KCBS radio in San Francisco, promoting new half-million dollar homes. Meanwhile, many Valley citizens, as reported in the Modesto Bee , can no longer afford to rent.

Bay Area advertising encourages home buyers to relocate to the Valley, displacing the local population. Home builders use land as a commodity for profit, not as a resource for community betterment. New homes are unaffordable to most Valley residents.

Since government regulates land use via zoning, mandating construction of affordable housing in conjunction with upscale homes should be a rule. Local government can either provide housing at taxpayer expense or require builders to provide a matrix of affordable housing at multiple price points, including apartments. The growth in the homeless population highlights the failures of homebuilders and governments to meet their obligations to the population they serve.

In receiving millions of dollars in campaign contributions over a period of many years, the majority of elected politicians in Stanislaus County have been and still are beholden to home builders. Anyone who examines political campaign contribution reports held by the Stanislaus County clerk will see a who’s who of home builders who helped elect “friendly” politicians.

A friendly politician enables home builders to profit by allowing construction throughout much of the region, regardless of compatibility with neighboring land uses.  Builders construct homes without regard to affordability by local citizens or community need.

Homes are built next to farms, leaving buyers to complain to authorities about nearby annoyances. One subdivision was built next to a dog kennel in Modesto’s Village One, subjecting the kennel’s owner (who had protested the project) to numerous noise complaints. The list of dubious and contested approvals is large, with new home builders winning zoning arguments over the objections of neighboring landowners much more often than not.

The taking of farm land for housing in the Central Valley is relentless. The land area within the cities of Stanislaus County is larger than the City and County of San Francisco. Yet, the homeless population continues to grow as home builders fail to build affordable units to serve local citizens.

In Stanislaus County, home builders have never been required to construct affordable housing.

Some Bay Area communities require affordable housing be built within high priced projects. While government intentions are good, potential buyers always have to enter a lottery to acquire an affordable home. Programs to build affordable housing are never adequate to meet demand, so Bay Area homebuyers come to the Valley.

In the Valley, government sponsored affordable housing projects have generated nice profits for builders as the cost of units are inflated above what apartment construction costs are in the private sector. Costs are in part determined by government-imposed regulations (safety codes, labor requirements, etc.) but those impositions don’t obstruct profits, they simply drive costs up. 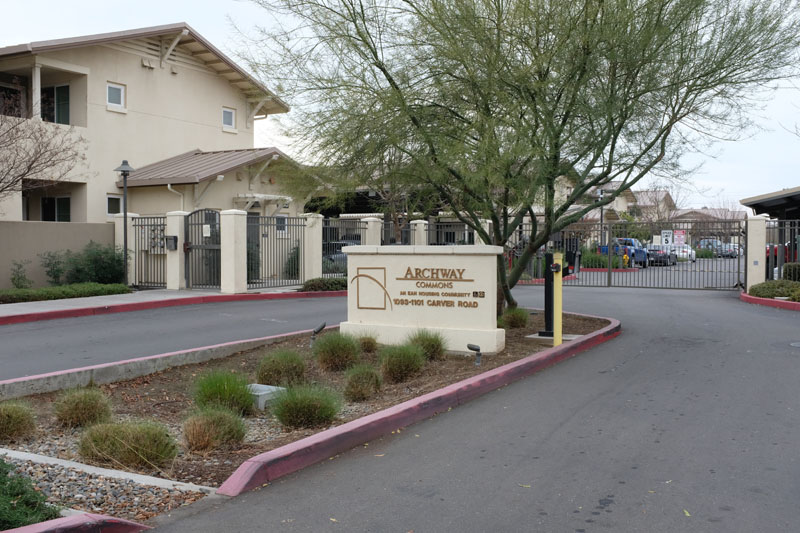 For example, apartment homes in Modesto’s public housing project at North Ninth Street and Carver Road, the Archway Commons, cost about $240,000 per unit. At the time of construction, single family homes were selling for less in some neighborhoods on the west side of town.

The number of units constructed through government programs is far below need, a contributing factor to the growth in the homeless population.

Home builders and their friendly politicians have lived by the mantra: “Let the free market take care of the problem.” The growing number of homeless people shows that the free market is failing. Where the free market doesn’t work, government is obligated to intervene for the good of its citizens.

“We Don’t Do that Kind of Construction”

Locally, apartments and condominiums are the most affordable types of housing because the units are small, modest, and relatively inexpensive to build; they don’t need much land per unit compared to single family homes.

Local builders sell large single family homes that can be quickly flipped to homebuyers from out of area because government allows conversion of farm land. If efficient land use became a requirement, economics would dictate multi-story and denser development.

Home builders prefer single-family homes to apartments because most don’t do that type of construction, apartments would need more capital, and would have a smaller number of investor customers.

By controlling local government using friendly politicians, home builders perpetuate a business model which is not sustainable for the industry or the community.  At some point, either housing density increases or we lose the entire farming base and jobs the industry provides. As housing sprawl spreads, the cores of communities decay. Homelessness still increases.

For many years, local governments have failed to collect adequate infrastructure fees from new home builders. Governments in Stanislaus County receive less money from home builders than the cost to serve their projects with roads, sewers, police, fire, parks and schools. The subsidies have been a drain on city finances, forcing service cuts and rendering communities unable to address needs of the homeless population.

In the past year, Stanislaus County voters passed a one percent sales tax increase to fund road improvements that should have been paid for by fees on new development. Low income citizens were harmed the most by a tax increase they could ill afford.

In 2002, a study of Modesto’s Village One finances found subsidies to builders reached an estimated $35 million. Taxpayer coffers were used to make up the deficit, crippling Modesto’s ability to serve citizens outside of Village One.

After the Village One deficit surfaced, home builder infrastructure fees were raised, but have never been closely tracked by the nine cities of Stanislaus County. To this day, builder friendly politicians subsidize new development infrastructure with taxpayer money, leaving inadequate resources to address homelessness.

Well before state-imposed drought regulations—for over 30 years—Modesto has had almost perpetual water rationing. Depending on the time of year, outdoor watering is only allowed two or three days per week. A shortage of water has never been the problem, not even during drought. Inadequate pipeline infrastructure to deliver adequate water pressure is the real problem. The city has no money to improve the system because builder subsidies keep Modesto’s treasury empty.

Even though citizens have water meters, where greater use would generate more revenue, Modesto still limits outdoor watering. Rationing could be ended if Modesto had sufficient funds to increase the carrying capacity of underground pipes!

Had new development been charged adequate water connection fees, citizens of Modesto would not be under perpetual water rationing.

Will problems like homelessness and water rationing ever be solved? The short answer: Not as long as builders elect a majority of friendly politicians who have no conscience about the well-being of citizens they are supposed to represent.

Bruce Frohman was a Modesto City Council Member from 1999-2003. He won office without any donations from residential developers, spending $1500 on his campaign. His opponent in the election spent $30,000 and had the backing of the residential building industry. During his tenure, Mr. Frohman was on the losing end of numerous 6-1 council votes; he voted against every project that subsidized residential development. Since he left office, the number of people without permanent shelter continues to increase.