Sadie Koch was stunned when she learned a few weeks ago that her sister, Mary Baca, is homeless. Though she hadn’t seen her in well over three years, Sadie, who lives in Escalon, thought Mary was still living in Modesto with her friend and partner Linda.*

The sisters had never been particularly close, but reunited when Mary returned to the Valley from Los Angeles, where she worked for a supermarket chain. At first, she continued working for the chain at one of its outlets in Turlock, but lost her job after a year or so.

That was about six years ago, around the time Sadie began noticing Mary’s erratic and disturbing behavior. First she thought her sister might be on drugs, maybe even heroin, but whatever the cause, Mary became more and more difficult to live with even during short stays with Sadie and her husband.

Things reached a climax when Sadie told Mary she should, “Get some help.” Mary responded with a hard punch to the face, and that was when Sadie realized she could no longer be around her sister.

Though they didn’t see each other face-to-face after the punching incident, Sadie and Mary still communicated via texts and email. Late one night a little over three years ago, Sadie received a text from Mary saying, “If anything happens to me, it was John Quincy.”*

Alarmed, and knowing John Quincy was a friend of Linda’s, Sadie called Mary, but Mary acted as though there was no reason to be concerned.

“I told Mary that when I receive a late-night text that my sister’s in danger, I should be upset, but Mary acted like she didn’t know what I was talking about.”

Not long after that episode, unbeknownst to Sadie, Mary began living in her car, an almost-new Nissan Versa she parked near Enslen Park in Modesto. It turned out Mary had had a falling out with Linda and had nowhere to go. The deeper story was that Mary’s erratic behavior had progressed into serious mental illness, in Mary’s case, acute schizophrenia.

One day, while she was wandering the streets, Mary’s car got towed. This was in the late summer of 2015. After that incident, Mary began staying in and around Gracaeda and Enslen Parks. For a while, she was an oddity among the homeless people who frequent the area, mostly because her clothing was new and well-tailored.

Luckily, Mary was noticed and taken under the wings of a homeless group that calls itself “The Family.” A loose association of long-time homeless friends, The Family watches out for vulnerable homeless people, especially the elderly, weak, or disabled.

Once they heard Mary’s ramblings about the eight men who lived underground and had put cameras in her eyes and microphones in her ears, members of The Family tried to watch her as much as they could. Now in her mid-fifties, Mary usually spends nights with a homeless man in his early sixties, known for his reliability when watching over other people’s belongings.

Only recently learning of Mary’s whereabouts, Sadie has experienced that terrible mixture of fear, helplessness, and overwhelming sadness close relatives of the homeless and mentally ill routinely suffer.

“Even though we never got along that well, Mary’s my sister and it hurts me she can’t get help. She’s sick and she needs help but my husband and I can’t take care of her; she’s just too much to handle.”

Sadie’s anguish over Mary is shared by thousands upon thousands of people nationwide.  In California alone, the homeless population numbers well over 100,000 people. According to the Treatment Advocacy Center, at least a third of homeless people are seriously mentally ill, suffering from schizophrenia, bipolar disorder, depression, schizoaffective disorder, and other maladies.

Mary Baca is thus only one of tens of thousands of seriously mentally ill homeless people in California alone, not to mention nationwide. She’s been outside almost three years now, and in that time she’s been treated by professionals one time for a total of fifteen days. Once diagnosed and given prescribed medication, Mary was released back to the streets.

The homeless people who know her say Mary was completely changed when taking her medication. She no longer talked about the people controlling her actions, no longer imagined nearby home invasions and kidnappings, and even stopped talking about the eight evil men who lived underground. 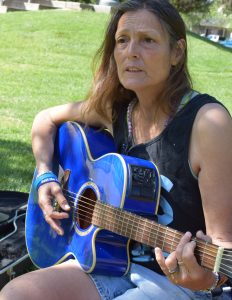 But as is the case with virtually every homeless person who’s treated with what Modesto’s Lonny Davis calls the “catch and release” program, Mary soon stopped taking her medicine and reverted to her schizophrenic delusions.

When Sadie saw a video of Mary playing the guitar followed by an interview for the Modesto Homeless Documentary Project, she couldn’t hold back tears. Mary taught herself the guitar as a teenager and has a beautiful voice, but Sadie was stunned by Mary’s condition.

“She is so lost in her delusions it’s unreal,” she wrote later. “It breaks my heart to see her like that and know there is nothing I can do to help her.”

In Stanislaus County alone, with a homeless population somewhere around 2,000 people, thousands upon thousands of family members experience Sadie’s despair at the lack of resources for the estimated three or four hundred mentally ill homeless people on the streets. Seriously mentally ill people need professional help, and there are simply few to no resources available. Family members who try to care for them when they refuse to take their medication must deal with random violence, broken furniture and dishes, dangerous neglect of burning stoves, cigarette lighters and matches, theft, and drug abuse.

And while there may be wide differences among people about the causes of mental illness, most everyone with a mentally ill family member will agree with Sadie Koch when she says, “It’s just not right. It’s just not right she should be out there when she needs help.”