Frank Ploof’s last job before retirement was at the Lawrence Livermore National Lab. He was a Computer Scientist by classification but spent most of his career defining and building information systems.  Working with scientists got him accustomed to information systems, critical thinking, testing theories, and working with data.

For well over the last five years, Ploof has been a key member of Modesto’s Homeless Documentary project. He’s also been a volunteer homeless outreach worker with an unsurpassed understanding of the services available for people in need. Prior to that he was on Modesto’s Blue Ribbon Commission for the Homeless.

After the Ninth Circuit ruling that criminalizing people who slept in public spaces when there was nowhere else to go was “cruel and unusual punishment,” Modesto authorities responded by allowing camping in Beard Brook Park. Located near industrial buildings along Modesto’s south Morton Ave., Beard Brook Park had been frequented by homeless people for well over ten years.

Early on, in part because he was so familiar with homeless people and services, city leaders asked Ploof to help coordinate the activities of people in the park with the City service providers.

“It worked well early on,” said Ploof last week. “We had a less than 200 hundred people and many of them knew each other. We broke the group into three sections and named leaders.”

Beard Brook Park soon became known as “Beard Brook Village.” It was conceived as a “low barrier shelter,” which meant there would be few restrictions and police patrols would be the same as in any neighborhood.

Ploof said that participation by the community at large was a key to its operation. The City provided water, porta potties, and trash pickup and the community provided nearly everything else. Volunteers, “really stepped up,” but over time even donations became a problem as the village population grew.

“We didn’t have a way to handle them,” said Ploof. “I had no real authority and no budget, so as the population grew, so did the problems. Tents were an especially valuable donation and we started getting complaints that some people were taking donations and selling them.”

Another major issue arose as the weather turned colder. Since there was no electricity in the park, the only source of heat was either from gas or wood. Gas was expensive and wood virtually free, so many were using wood for cooking and heat. Unfortunately, because wood smoke was causing air pollution issues, all wood fires were banned, which left folks with no way to heat or cook unless they could afford gas. 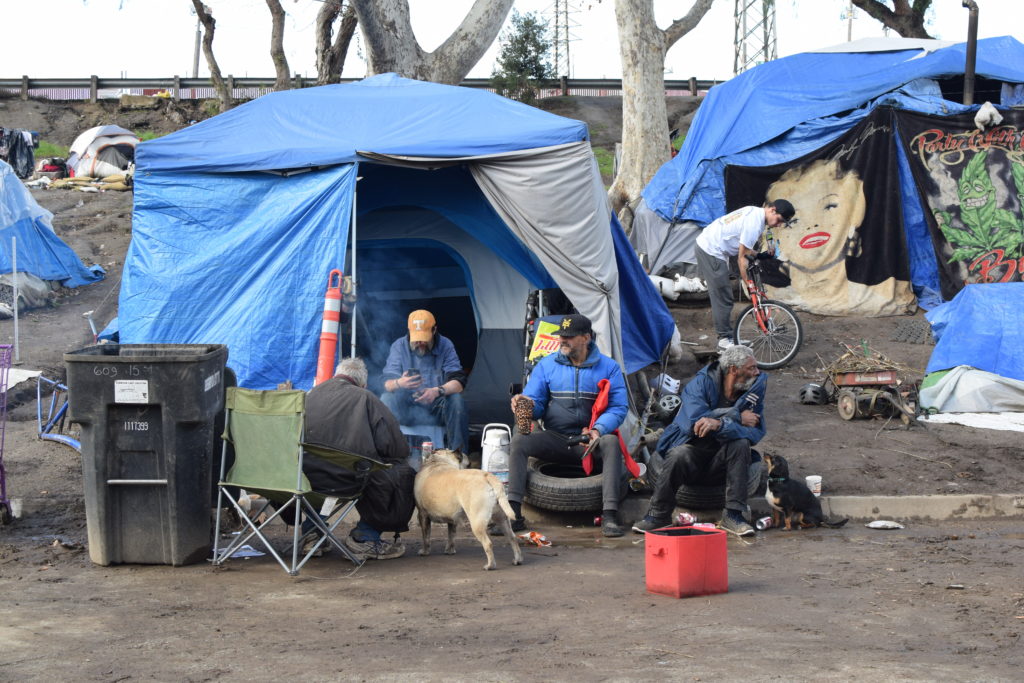 Eventually, the population of Beard Brook Village grew to over 400 people. “We had a code of conduct, but enforcement was problematic,” said Ploof, “so we had ‘park justice.’”

“Park justice” is the time-honored way homeless people police themselves. Anytime a member of the group violates the unwritten codes of conduct among homeless people—stealing from the group, bullying, etc.—he or she is pushed out of the group. Usually the pushing only involves a group of three or four people telling the unwanted person to get out.  In the most extreme cases, law enforcement is alerted.

“We only had two extreme incidents,” said Ploof. “One was a stabbing involving a developmentally disabled person and the other happened when a man in a car started aiming it at people. He managed to sideswipe a few before crashing the car outside the park.”

“After a while,” said Ploof, “we began running out of room.” For the most part, problems in the growing village involved ongoing cursing between squabbling couples, shouted threats, loose dogs, overflowing trash receptacles and filthy porta-potties.  Overall, police calls involving homeless people dropped dramatically around the city, and when the cops did step in at the village, people complied with their commands.

Ploof said that in addition to the declining crime statistics around the city, Beard Brook Village made it easier to locate and help people in need.

“Many people were relocated to housing and some even found work,” said Ploof. One couple became managers of a trailer park, based on their past work experience.

As homeless encampments have become more common, especially in cities where rents have soared past incomes, authorities are increasingly faced with the dilemma of permitting camping or moving people on. The Ninth Circuit Ruling has driven local leaders to permit camping in designated areas, but most authorities are looking forward to expanding capacity at shelters.

In almost all cases, civic leaders hold expectations that people will at some point become mainstreamed and independent. Frank Ploof believes that will happen in only a few cases.

“If you move them, they can adapt to new places, but you can’t change who they are,” said Ploof. “They’re people who need help.”

Ploof said finding the services people need is a challenge in itself, but the real problem is, “There’s not enough service capacity, period. I think we have all the necessary services, but many have very limited capacity, thus overloading case managers, and so forth.”

The lack of service capacity and an even more critical lack of shelter are major reasons people like Frank Ploof favor a “housing first” approach to homelessness. Unfortunately, California has a severe housing shortage—especially affordable housing—which is perhaps the major reason for such widespread homelessness.

Many homeless people receive disability and social security incomes, but the amounts aren’t enough in our rapidly escalating housing market. Even the cheapest motels can charge $60 per night, though the recently condemned Budgetel on Modesto’s McHenry Avenue was reportedly offering “bargain” rates at $350 a week.

At these prices, it takes more than an entry-level job to afford housing, and homeless people rarely even have a place to hang their clothes or do their laundry, let alone look presentable on a daily basis. Until affordable housing becomes more available, Ploof favors encampments, though he adds they need to be managed.

Ploof said his motivation for working with homeless people at Beard Brook Village was to provide help, but he wasn’t able to as much as he wished as operating the village took precedent.

“It got hectic at times, and I got pushed to my limits. I was really only able to help at the end.”

Though Ploof doesn’t particularly like bureaucratic structure, he says the transition to the Modesto Outdoor Emergency Shelter (MOES) has been successful and represents an improvement for most people.

“They have bigger tents and more room,” he said, “and there’s a security presence at night.” Most people in the new camp appreciate the presence of social workers and even law enforcement, especially since Modesto Police Officers have been able to establish trust among the campers.

Still, Frank Ploof can’t help thinking of what it will take to really help homeless people.

“The transition to MOES was small enough that most people from Beard Brook handled it well,” said Ploof. “But there are still homeless people who wouldn’t have anything to do with Beard Brook and won’t come in now either. We’re helping around 400 people now, but there’s still around 1500 in the county who are out there on their own.”

Ploof thinks Beard Brook Village was not just beneficial to the campers. “We learned a lot from Beard Brook we can apply to MOES,” he said. Many of the lessons involved anticipating problems no one could see at first.

“A hoarder is a hoarder is a hoarder,” said Ploof, referring to people who spend much of their time foraging and bringing things back to camp. “The rule at MOES is whatever you bring has to go in your tent. About 80% will comply and about 20% won’t.”

It was that 20% who left a huge mess at Beard Brook Park, and Frank Ploof doesn’t want to see the same mess at the new camp because he believes tents are our best current solution for homelessness, at least until we can provide better alternatives.

“People are okay in tents,” he said. “I think we need to continue having tents until we have some progress on housing.”

Given the positive reaction of homeless people to MOES, Frank Ploof may be underestimating how much he’s been able to help.

“This is a lot better,” said one homeless man who’d been in a small tent at Beard Brook Village. “I can stand up.”

Thanks to Frank Ploof and people like him, more and more homeless people are getting on their feet, even if only to get off the ground. It might seem a small thing, but it’s progress—real progress.