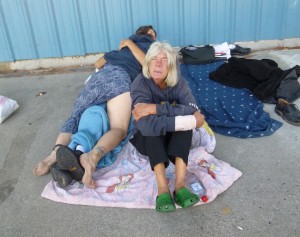 Donnie and Johnnie are on the move. Johnnie, the small guy with the big ears, is pulling a little red wagon. It’s laden with an odd assortment of found objects, including a putter.

In context—Modesto’s south side near the Gospel Mission—the putter looks nothing like a sportsman’s tool. It looks instead like a weapon, and that’s probably its only potential in the hands of Donnie or Johnnie.

Except for the tattoos, which could be illustrations under the definition “prison tattoo,” Donnie and Johnnie don’t look particularly rough or violent, but Donnie does have the coiled intensity of so many of the young and homeless.

On they come, moving east down Yosemite Boulevard toward the Gospel Mission, then left on North Santa Cruz and into “The Yard,” the parking lot between Yosemite Boulevard and La Loma Avenue where the homeless often meet to exchange news with others of “The Family.”

Old Alice is out on the sidewalk in her usual place. Thanks to a couple of lucky hits on passing strangers, she’s already on her second half pint of Royal Gate Vodka, which can be had for under two dollars, an easy score for someone persistent enough to ask everyone she sees for a dollar.

Most homeless alcoholics who panhandle learn that asking for a dollar tends to get them from bottle to bottle more effectively than just asking for handouts. Many people are happy to escape an encounter with the pathetic homeless for only a dollar; some passersby give more.

Next to Alice, Marvin is underneath the new girl, a lanky young woman whose most notable feature is the ankle bracelet on her left leg. Neither person is moving; in another environment they might be mistaken for discarded mannequins.

Donnie is supposed to meet the mother of one of his children soon, and keeps looking across the street to a spot in front of the Mexican restaurant where she’s supposed to show up. All he sees is the old man who’s taken up residence in the dirt on the far side of the restaurant.

The old man is trying to stay on the sidewalk while holding a small sack containing his ration of Natty Daddy beer—twenty-four ounces can be had for a little over a buck. At eight percent alcohol, it’s a good buy for those whose stomachs can no longer handle the hard stuff.

Donnie watches him zig and zag his way down the walk, and notices his left arm is hanging limply, which almost certainly means he’s fallen down again. Mildly concerned, Donnie watches as the man finally makes it around the corner to his resting place.

When his woman shows up, Donnie makes sure to check on the old man. Sure enough, the old guy’s passed out with his hand wrapped around the unopened Natty Daddy.

When a stranger comes up and says, “That old man is going to die out here if we don’t do something,” Donnie is silent for a moment. Then he says, “Maybe he wants to die. Maybe he’d rather die than be out here in all this shit.”

“You think we should just let him lie there,” says the stranger.

“He lays there every day,” says Donnie. “It’s his business, not anybody else’s. He just wants to be left alone.”

Johnnie comes along now, pulling the wagon behind him. The stranger glances into the wagon and all he can see is the putter; it alarms him to think how it could be used as a weapon.

“I know you think you’re a nice person,” says Donnie, who seems agitated. “Just remember, not of all of us want to be treated like commodities or somebody’s problem. I’d rather be out here than have to be treated as less than human.”

“Do people treat you badly because of the tattoos,” says the stranger, concerned by the conversational drift.

“That and other reasons,” says Donnie, reaching into the wagon. For a moment the stranger thinks Donnie is reaching for the putter. Instead, he grabs a small red rock.

Still alarmed, the stranger feels as though Donnie intends to throw the rock at him, and Donnie even seems to be considering such an act himself. He is almost seething and seems to become taller and thinner with intensity. But then he relaxes into a kind of resigned grace.

“I found this rock a while ago and picked it up because it reminded me of the heart of Jesus,” he says, handing the rock to the stranger. “I’d like you to have it.”