In the end, it wasn’t the beatings, the sexual abuse, the hunger or the ugly words that broke Carrie Turnquist; it was the indifference of others.

After she was badly beaten when a passenger in a passing car jumped out, pulled her hair back and began punching her in the face and head, she lay on the sidewalk while people watched and did nothing.

“I felt like a dog that had been injured and tossed to the side of the road,” she said. “Nobody cared. Nobody offered to help. I felt like my life didn’t matter to anyone. I was badly bruised and bleeding and had to walk by myself to Doctor’s Hospital. I knew I had to get out.”

Carrie was beaten on South 9th Street in Modesto on February 15, 2017, in an area so notorious for drugs, crime and prostitution it was featured in a 2016 documentary film entitled, “The Nine.” At the time, she had been a Modesto resident for over twenty years, most of them homeless.

Carrie had been beaten before, off and on all her life, but never this severely. The daughter of an alcoholic mother who belittled and blamed her, and an often-absent father, she felt rejected almost from birth.

Born 44 years ago in Salinas, California, Carrie’s world came apart when her father died, followed four weeks later by her sister. Afflicted with a severe overbite and a tendency to put on weight, she was a natural target for the cruel ridicule of kids and classmates, ridicule that continued into adulthood.

By her late 20s, she was a drug-using criminal with a specialty as designated driver of getaway cars for thieves and robbers. Attempts to establish stability and security through marriage and work were thwarted by a husband who stole and squandered money. She fell into homelessness repeatedly, even after stints with Sacramento’s Loaves and Fishes program.

Carrie’s life began to change when Beard Brook Village opened for permitted camping in the fall of 2018. In 2019, not long after Beard Brook closed down, Carrie moved with hundreds of others to the Modesto Outdoor Emergency Shelter (MOES).

For a woman who had been belittled, ridiculed, beaten or ignored most of her life, MOES became a haven, even though she still suffered from occasional bullying and taunting. The biggest difference for Carrie was she found people who listened and tried to help.

“Doug Holcomb was wonderful,” she said of the camp’s director of logistics and support. “He listened to me and he really cared. Red Hawk [Darnelle] was always there when I needed him. That lady at the Spotlight Café [Angel Huerta] is a miracle worker and so is  the man with the red truck [Frank Ploof]; they are angels,” she said of the staff and volunteers who were an almost daily presence at the campsite.

For almost the first time in her life, Carrie began to feel a sense of self-worth and dignity. At times, though, she still felt helpless and vulnerable. She also got a much-needed rest.

“You never have a chance for R&R [rest and relaxation] when you’re homeless,” she said. “You’re always being told to move from wherever you are. You can’t even get a good night’s sleep.”

At MOES, Carrie qualified for dental assistance. Later, she received new teeth and  corrections for her overbite. She lost the teeth when they were confiscated by a self-appointed custodian of the Tuolumne River.

“I was fishing along the river one day when I left my stuff for a few minutes,” she said. “When I came back this man in a pontoon boot had taken my pole and belongings. I asked to at least give me back my teeth and the medicine for my dog, but he told me I had no rights and didn’t belong along the river.”

Losing her teeth was a devastating blow, but it was even worse to lose the medication for her beloved dog, Peanut. 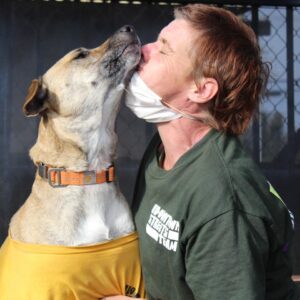 When Carrie moved into a local shelter after MOES closed, she had a long talk with Peanut about having to stay in a cage at night.

“I kept telling her everything was all right and I was still there for her,” she said.

Carrie was able to adjust to having Peanut in a cage, but had difficulty understanding some of the rules at the shelter, especially when the Covid pandemic brought about more complicated requirements.

Still struggling to adjust to shelter living, Carrie found the path she’d been looking for when she joined the Downtown Streets Team (DST).

DST offers a deceptively simple program with a remarkable record of success getting homeless people off the streets.

Rules at DST are simple.

The most important rule, said Clifford, is, “show up. Once someone joins, all we say at first is, ‘show up, and walk with the team.’” At first, there are no other requirements, not even a drug test.

“Sometimes we have to send someone home,” said Clifford, “but not often.”

DST is designed to get homeless people off the streets and into housing by means of gainful employment. One key to its success is buy-in from team members, who volunteer to join.

Volunteers join teams that pick up trash. They agree to receive stipends in the form of coupons redeemable at local retailers. Almost unconsciously, they learn simultaneously the value of work and necessary skills of resource management, i.e., how to manage money through the use of the coupons.

“It’s not enough to get people housed,” said Clifford, “you’ve got to teach them how to stay housed. The longer people are homeless, the less able they are to become self-sufficient, even when inside. We’ve had people go shopping for groceries then put the meat they’ve bought into cabinets. They don’t know it goes in the refrigerator.”

Designed to last a year, the DST program puts fundamentals like showing up ahead of filling out forms, traversing a labyrinth of services and care providers, and producing credentials and job histories. A basic principle is that useful work bestows dignity and self-respect, especially when guided by peers. 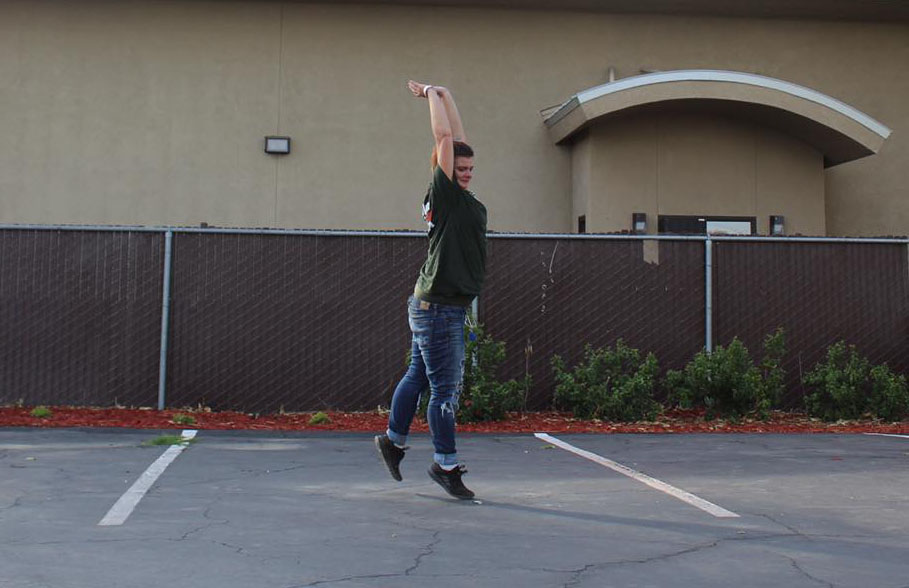 “We have 60 people in the Modesto program, and 40 on the waiting list,” said Clifford, attesting to the popularity of a program for people who often refuse help of any kind.

Ask Carrie Turnquist what she’s learned working with the Streets Team, and she says, “Meggan [Clifford] taught me I am valuable, worthy and important.”

Today, Carrie Turnquist proudly wears the green shirt of a team leader for the Downtown Streets Team. After qualifying for rental assistance, she has an apartment of her own.

She says, “I feel like a giant. I even understand now what happened to my mother. She went through so much I never understood. She’s a giant too.”

Like a lot of working people, Carrie has a routine for when she gets off work: