For Modesto residents, the New Year is already more troublesome and more expensive, and it’s only just begun. The new one percent sales tax increase and higher garbage collection rates are bad enough. Then there’s the new recycling program and its complicated disposal system.

As the city’s website says, all residences must have three large waste cans — blue, black, and green — even though they may have space enough for only two. Furthermore, residents who fail to comply with the new rules will be subject to increasing fine amounts beginning at $250. A city employee will rummage through people’s trashcans looking for violations.

Waste in the wrong can might result in a fine. If the new blue recycle can is determined to be too dirty, the resident will be ordered to clean it or face a fine. Residents are also required to clean waste for the blue bins in certain circumstances. This is one instance in which wasting water will be encouraged.

When distributed at the end of December, the new blue bins included a list of items for each of the three cans.  The problem is the list is incomplete. You have to go to the city’s web site for a more complete list. Citizens may have to call city staff with questions regarding items not listed on the web site.

There’s a fourth category of waste that can’t be placed into any of the three cans — toxic waste. Citizens must remember the list of toxic waste items or risk being fined for misplacing those items.

The last time I went to the Stanislaus County toxic waste disposal site, it was only open for a few hours on one day a week. The hours coincided with most working hours. At the  site, a staff worker told me that about half the items I brought were NOT considered toxic waste.

The blue cans were distributed several weeks ago. Many residents did not get the message about bi-weekly pickups, so packed blue cans are on curbs all over town.

When they decided how to implement the state mandate to increase solid waste diversions, the Modesto City Council and staff didn’t seem to remember the failed curbside waste program of the 1990s. Back in those days, recycle material was routinely stolen from the collection buckets to the extent that very little remained.

This time around, with clean cardboard included in the blue can, perhaps more will be collected, but will the volume be enough to justify the extra can? Moreover, a new problem has been created regarding the Green Can. 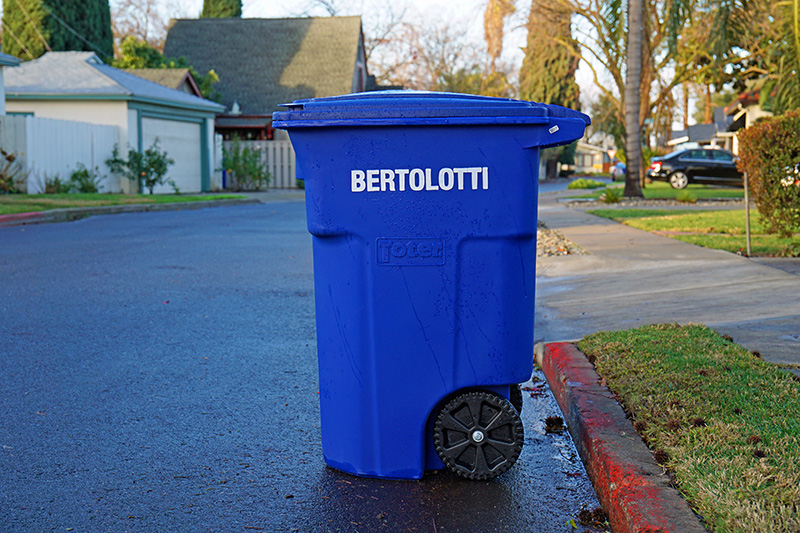 Now that the Green Can will be emptied every other week, residents who have been filling their cans weekly will have their monthly capacity cut in half. This will force more green waste into the streets when the Green Can is full.

Another requirement of the Green Can is for kitchen waste, which stinks as it decomposes. Residents have said that the stench emanating from the green cans after two weeks will be overwhelming, especially in the summer months.

Plastic bags can’t be used in the Green Can, so the smell won’t be contained. Expect compliance with this requirement to be low.

What About The Black Can?

The State of California mandate is that more than seventy percent of the garbage stream must be diverted to recycling. Ergo, no more than thirty percent of garbage should end up in the black can in order to meet the mandate.

Let’s do some math, based on a random “average” amount of waste.

The collection schedule defeats the purpose of adding the third can for recycling. To encourage more recycling, green waste recyclables should be collected more often and the black can collected less often.

Wil Modesto’s new collection policy work for its residents or will the residents suffer from poor planning by city government? Time will tell.