A while back, Modesto Doctor C.V. Allen wrote that election time is, “a season in which truths die by the thousand, hyperbole reaches its apex and most Americans plug their ears and wait for it all to pass.” Dr. Allen was writing in response to a, “Jeff Denham hit-piece mailer suggesting Josh Harder’s health plan would ‘make you sick.’”

Dr. Allen felt compelled to write because he’s among that shrinking group of responsible citizens who believe we should at least observe minimum standards of truth, even during election season. He’s also spent most of a lifetime administering and studying health care and is one of the founders of Modesto’s non-profit Memorial Medical Center. In short, he knows what he’s talking about.

Jeff Denham’s mailers on health care aren’t his only hit pieces. Most everyone has seen Congressman Denham’s bizarre mailers attacking Josh Harder as, “Bay Area Harder.” One of the mailers shows Harder floating in a Lotus Position.

The image might be based on caricatures of the Bay Area as peopled by air-heads, hippies, and members of the Hare Krishna cult. But those images are associated with the long-lost 1960s. The Bay Area today is the high-tech capital of the world, a roaring juggernaut of innovation and capital creation. It’s nothing like Denham’s weird caricatures.

Do these relationships make Denham, “Bay Area Jeff”? Not really, but he most certainly has stronger ties to the Bay Area than Josh Harder.

But there’s more. While Josh Harder and his wife actually live in Turlock, where Harder was born, Los Angeles-born Jeff Denham, until very recently, lived in Virginia, at 6501 Sandy Knoll Court. The house sold for $1,370,000 last April. Recent reports have Denham and his wife living in Washington DC. 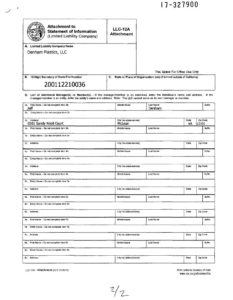 Jeff Denham’s attempts to portray Josh Harder as an outsider aren’t just politics as usual, they’re smokescreens for Denham’s almost complete disconnection from his own congressional district, his biennial visits to campaign notwithstanding.

Denham’s pose as a Valley farmer and his lip service to immigrants and district residents are belied by his record of voting along party lines 97.8% of the time. Even staunch Republican Tom McClintock in nearby District 4 only aligns with the party 81.5% of his votes.

Jeff Denham would like people to believe that Josh Harder is willing to turn his back on his own family and friends in favor of a nebulous connection to the Bay Area. In fact, Harder is the one with real ties to California Congressional District 10 and Jeff Denham knows it. That’s why Denham is trying so desperately to confuse the issues.