About this time last year, insiders in California Congressional District 10 (CA-10) were predicting another win for Jeff Denham, the seemingly invincible incumbent with an eight year  term of office and the overwhelming support of local farmers and business people. Denham’s win seemed so inevitable that even some of the district’s most influential Democrats were starting to show up at his fundraisers.

Congressman Denham may have been leading, but his Democratic opponent was  used to running from behind. During the Primary campaign, Josh Harder had spotted late-entrant Michael Eggman a twenty point lead and surged past him in only a little over three months.

Late polls had also showed a comfortable lead for Eggman, but Harder was undaunted. “I’d be running the same way if polls showed I had a twenty point lead,” said Harder at the time. Running hard all the way through Election Day, Harder pulled away from Eggman and won easily.

Employing equal parts laser focus and warp speed, Harder caught Jeff Denham in much the same way he had tracked down Michael Eggman. He hasn’t slowed down since.

Sunday, Harder was meeting and greeting CA-10 voters at private residence in northern Stanislaus County. After greeting many people by name and chatting, Harder mounted a platform and presented a quick rundown of his term so far.

The freshman Congressman said that when he learned local veterans who had suffered from exposure to Agent Orange were having trouble accessing medical care, he helped sponsor a bill that would get them immediate help. The bill was subsequently passed by both Houses of Congress and signed into law by President Trump.

Harder said that after joining in ride-alongs with local police officers, he found that cops were too often doing the work of social workers, especially when dealing with homeless people, so he’s sponsoring legislation that will help hire more social workers and more cops. He’s sponsoring legislation that will help bring us more doctors and more training for jobs that will enable high school graduates to make a living without a college degree.

“We need more pathways to the middle class,” said the Congressman. “We need to make sure college is not the only option.”

Harder said he’s also working on money for Head Start programs, water infrastructure, and legislation to lower costs for prescription drugs. He said that he was convinced he had to support impeachment of Donald Trump because,

“If we were to do nothing, it would only embolden his behavior.” 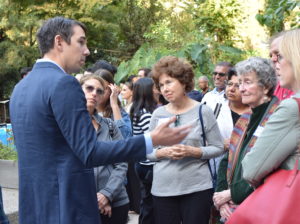 Harder closed by noting that his win in 2018, “has the risk of being an anomaly. It can be a miracle that is not repeated or a critical step forward toward progressive change.” He said it was important to keep registering voters and sustain the surge of young and minority voters that put him over the top last election.

Ending his remarks with an invitation to chat and answer questions, Harder was immediately surrounded by constituents eager to talk with a congressman who listens to the people. Not much had changed since his winning campaign—Josh Harder was still drawing crowds and still running at warp speed.