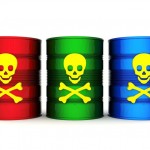 In our last report, we outlined problems with the mounds of dirt in the 132 right-of-way near the 99 freeway believed to contain toxic waste.

As of this writing, Caltrans is working with the California Department of Toxic Substances (DTSC) to determine how heavily contaminated the dirt mounds are and what to do about them.  Until a decision is made about remediation of the dirt piles, construction on the eastern end of the 132 freeway project can’t begin.  The western end of Highway 132 freeway is already under construction between Interstates 580 and 5 and may be finished before the eastern end is started.

On April 15th, Nathan Schumacher of the California Department of Toxic Substances provided an update on the study of the toxic waste mounds.  His report is based on research conducted by an independent contractor for Caltrans. He stated in an email:

“Barium exists in Modesto’s ambient environment at between 17 and 120 parts per million.

“For Stockpile #1, Barium ranges from 37 to 1700 parts per million with an average of 82.  These amounts are all found deeper than 6” below ground surface. Usually the higher concentrations are at lower depths inside this pile.

“For Stockpile #2, Barium ranges from 49 to 64,000 parts per million with an average of 5440.  These amounts are all found deeper than 6” below ground surface. Again, the higher concentrations are at lower depths inside this pile as well.

“For Stockpile #3, Barium ranges from 35 to 126,000 parts per million with an average of 4310.  These amounts are all found deeper than 6” below ground surface. Once again, the higher concentrations are at lower depths inside this pile as well.”

When Caltrans deposited the dirt in the 132 freeway right of way in the 1960’s, the bottom of the FMC settling pond was scraped first and then deposited in the right of way.  Clean dirt was added to the top of the piles to finish them off.  At the time the dirt was moved, the level of toxicity of the soil was unknown.  It wasn’t until the 1980’s that the severity of the contamination was realized, coincident to the start of the remediation of soil at the old FMC site.

Barium exists in toxic levels hazardous to human health within the piles of dirt in the 132 freeway right of way. Therefore, the DTSC will need to determine the best method of remediation so that the contaminants don’t enter the groundwater or create public health hazards.

Unlike the FMC property, the Caltrans 132 right of way site was loosely monitored until recently and no cleanup effort was ever undertaken.  In 2005, a study by Shaw Environmental Labs recommended that Caltrans remove the soil in the piles to a hazardous waste site. Caltrans decided that since there were no immediate plans to build a freeway, the piles could be left alone as long as they were properly monitored and people were kept out of the right of way.

Subsequent to the monitoring agreement between DTSC and Caltrans, Caltrans was found in violation by DTSC for inadequate monitoring and care of the toxic waste site. People were trespassing as fences were vandalized and breached. Groundcover vegetation was found to be lacking and storm water runoff left the site during storms.

Now, DTSC will be using the results of the latest soil study to update the recommendation of Shaw Environmental Labs. The recommendation could include removing all, some, or none of the piles.  The least expensive recommendation is thought to be sealing the piles permanently in concrete. However, the consensus in the surrounding community is to completely remove all the dirt contained in all the piles in order to make sure all the Barium is removed. This is because there are houses immediately south of the toxic waste piles.

Stanislaus County Supervisor Terry Withrow, who represents the district containing the 132 Freeway Right Of Way, reported recently that more money has been found to build the first phase of the eastern end of the freeway.  He indicated that the first phase facility from freeway 99 to the west may be built beyond the originally planned ending point at Dakota Road. This possibility is based on the assumption that funding will not be lost because of the delay in the start of construction.