Fear, rumors and resistance rippled through Beard Brook Village prior to this week’s scheduled relocation to a site just a few hundred yards away. The wildest rumor was that the new location was actually a FEMA camp.

Some villagers had more reasonable concerns, especially about the size and placement of the tents. “Camp Mom” Melanie Slagle posted some reservations that seemed justifiable:

“10×10 isn’t big enough for me, my guy, our 2 dogs, and our belongings, including 2 bikes, 2 trailers, and a wagon. It would be more feasible to allow some storage outside of the tent. Plus who wants your neighbor to be so close they can hear everything you say and do? It’s not supposed to be like jail. But these are still just some of the issues.”

Slagle also mentioned that many people were reluctant to register for a tent, most likely because some homeless people have warrants for petty violations—camping, curfew violations, etc.— and are afraid to register because they fear they might have to do jail time.

Those who seem most comfortable with the new site, tentatively dubbed “Gateway Village,” include older homeless people who’ve been on the streets for years. Less concerned about privacy than many of the younger people, the older folks are thankful to get out of the cold weather and have access to porta-potties and wash stations. 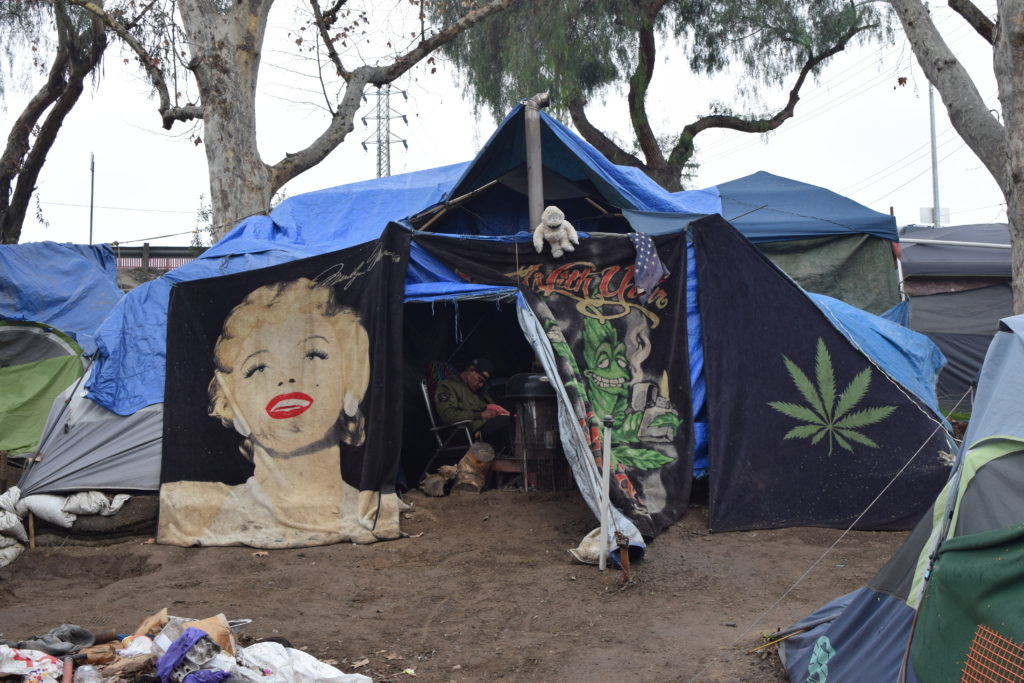 But the 10×10 size will certainly prove too small for families with children, and Beard Brook residents have already learned the hard way that placing families can involve proper location as well as adequate space.

Some homeless people, including couples, are remarkably profane. Their language can be loud, raw, provocative and frightening.

At Beard Brook Village, some of the older homeless people were solicitous of children and helped locate them where they would be less likely to be exposed to bad language. The close proximity of tents at Gateway could make this problem worse, especially if there’s little chance for relocation.
While round-the-clock security at Gateway will be a much-appreciated improvement, it’s also seen as a challenge to the “low-barrier” policy which made Beard Brook Village an option for people who use drugs and alcohol. 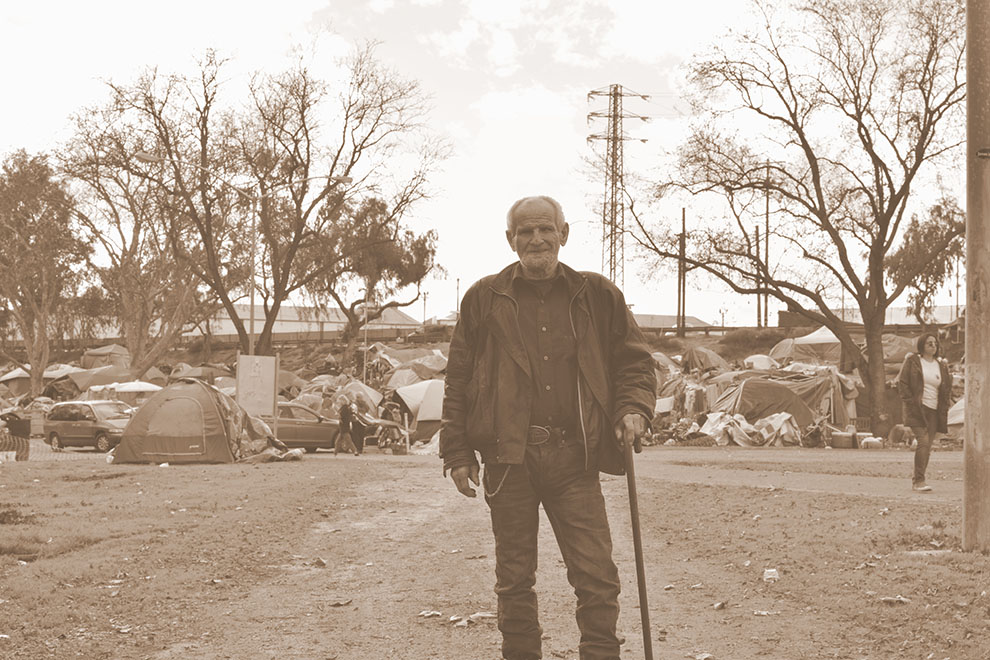 Whereas there is plenty of drug use among people who are housed, it’s only noticed when it results in violence or serious accidents. Among homeless people, drug use is more visible and thus subject to more complaints.

The simple fact is that most homeless people who use drugs do so without causing trouble. Those who do cause trouble are subject to discipline known as “park justice.” As a rule, homeless people police themselves.

Beard Brook Village has had remarkably few violent incidents, but no one believes it’s drug free; drugs are as prevalent there as anywhere. But drug users who’ve gotten out of line have been run off, just as they are in the parks, river camps, and other places where homeless people congregate.
If the low-barrier policy doesn’t transfer to Gateway Village, many homeless people will view the new location as a trap. 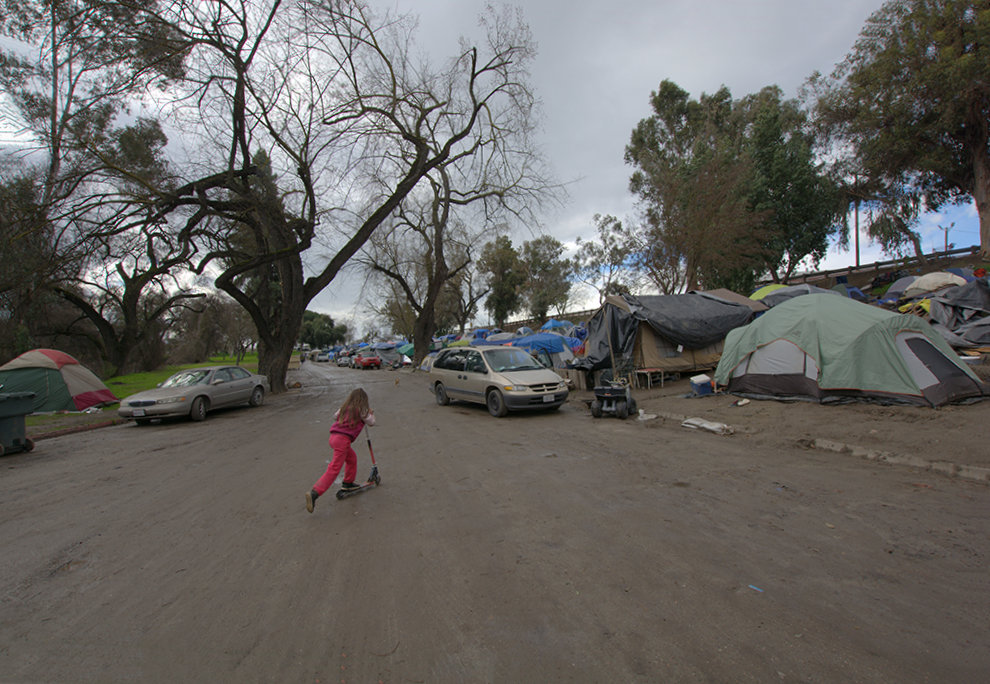 The difficult thing for most people to accept is that homeless people in general have learned to deal with the routine harassment that comes with being homeless. If they have to choose between giving up their drugs or moving from park to park, they will move from park to park.

The popular view is that such people should be subjected to “tough love” and punished for their drug use. It should be evident by now that jail time and harassment don’t work. Those who say permitting drug users to camp simply enables their habit miss the point.

Drug users are far less likely to stop using or even want to stop using under the stress of homelessness, which features routine sleep deprivation, poor nutrition, poor hygiene and constant fear. And addiction is far more difficult to comprehend and address than most people think. 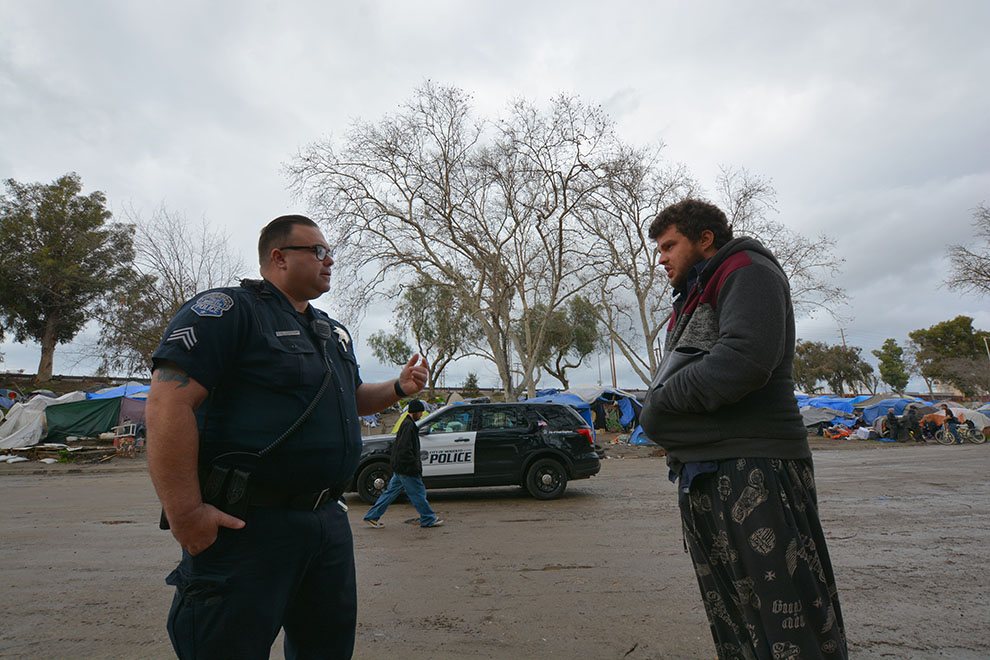 Anyone who doubts this is the case need only consider the opioid epidemic among retired professional football players. Many started using pain pills their rookie years and became severely addicted after retirement. Despite their status, high incomes, and histories of hard work and achievement, most are able to quit only after expensive treatment and with strong support from their families and peers.

The fact is, homeless drug users are far more likely to seek help if they have the security of a place to stay and community support, even if that community includes other drug users. Outreach workers have been able to develop relationships and trust at Beard Brook Village simply because they’ve been able to locate people in need on a routine basis.

The low barrier concept for homeless shelters is based on the notion of harm reduction. If permitting people to camp or shelter themselves with few restrictions results in reduced crime rates, higher rehabilitation rates, better sanitation and cleaner public spaces, most people would agree the policy is worthwhile. Nonetheless, there will always remain a loud chorus of complaints about “rewarding” lazy and sinful people.

Those who consider such complaints legitimate objections should contemplate the reality that even with Beard Brook Village sheltering over 400 people, far more remained on the streets, in our parks and alleys, and along our rivers. Incarceration and harassment have been proven futile responses to their presence.

Beard Brook Village has not been a perfect solution to homelessness because there is no perfect solution—but it’s been a revealing crucible. Until homeless people can be housed, tent camps like Beard Brook Village would seem to be effective means of harm reduction. Maybe we need more camps like them. Maybe we need to become more pragmatic and less stuck in cycles of repetitious futility.