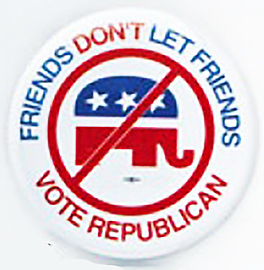 Especially since Donald Trump prevailed in the 2016 presidential election, Democrats have been urged to develop better understanding and sympathy for Trump supporters. The idea is that Trump supporters have good reasons to support Trump and Democrats need to understand and address those reasons so that they can develop a winning platform next election.

We call BS. Donald Trump won in 2016 because angry voters in the nation’s rust belt gave him a one in one-hundred shot at a freak electoral victory. And there’s no mystery why those rust belt voters were angry: They had been abandoned by both parties long ago, and Trump sold them on the idea that he would “drain the swamp” of politics from Washington DC by putting people before party.

So what if it was a lie? Trump won because he ran against both parties and he’s holding on because Republicans, both in and out of congress, have decided they like his policies just fine.

The truth is, the only thing about Donald Trump Republicans don’t like is his transparent racism, his careless fornication, his open contempt for the rule of law (they prefer the contempt hidden), his defense of criminal cronies, and, well, the list goes on. The point is, Trump makes it hard to apply the usual Republican double standards mostly because he doesn’t even pretend to have standards.

In local elections, Republicans have long promoted another routine double standard—the myth that local elections are apolitical. Thus, when we vote for mayor, city councilmembers, supervisors, sheriffs and other positions, we’re supposed to vote for the person over the party. The result in the San Joaquin Valley is widespread dominance by local Republicans.

But as Steve Ringhoff has pointed out, ideology is as important at the local level as anywhere else. And Republican dominance has resulted in incumbent advantages up and down the ballot.

Thus, it’s easy for Republicans to argue we should vote for the person and not the party, especially when the person is an incumbent with far more specific knowledge of things like budgets, personnel, and resource allocation.

If we want analogies, we can compare national expenditures on the defense budget and local expenditures on law enforcement. Does the Stanislaus County Sheriff’s Department really need, “two airplanes, two helicopters (one needing about $1m in repairs) and 10 drones (one costing $9k)”?  Republicans tend to spend more on weapons and security issues in general than Democrats, both locally and nationally, while Democrats tend to spend more on education and social services.

There are hosts of other differences between Republicans and Democrats on any number of local issues, including wages, housing, homelessness, crime, drug use and more. Nonetheless, the myth that local government should be apolitical exerts a tremendous hold on voters, and here in the Valley it means ongoing Republican dominance of local politics.

Probably the best way to break that regime of dominance is ask one or two simple questions. The first question, when someone asks you to vote person instead of party is to inquire whether the candidate in question voted person or party in the last presidential election. Here in the Valley, the answer will almost always be that the Republican candidate voted party over person; everyone knew about Donald Trump’s unfitness for office long before Election Day, yet Republicans, and especially Valley Republicans, voted for him.

The second and last question is simple: “Why should I vote for someone with such bad judgment and so little regard for the nation?”