Longtime Modesto Irrigation District Board member John Mensinger announced recently he would be stepping down from the board. Thus far, the only declared candidate for his position is Frank Damrell, former Senior District Representative to Cathleen Galgiani when she was a State Senator.

Mensinger’s term was stormy, with board members disagreeing about water sales, electricity rates and lawsuits. In one recent lawsuit, female members of the district’s legal department accused Mensinger of, “gender discrimination, retaliation and more.” The district settled the case without admission of wrongdoing by Mensinger.

Any new board members will face a host of problems, some of them ongoing over decades. MID has never managed to separate costs of delivering electricity from costs of delivering water, and that failure alone has made the district look incompetent and vulnerable to charges of fraud and dysfunction.

Now, with drought looking like the new norm, MID and other local districts will have to contend with the ongoing drawdown of the Modesto Subbasin, which some estimates show has a deficit of over 135,000 acre feet of water during recent years.

Largely due to the proliferation of groundwater-dependent orchards on Stanislaus County’s east side, the deficit threatens the viability of the last remaining sustainable aquifer in the San Joaquin Valley. When farmers on the east side planted almonds and walnuts in the rolling hills that formerly supported grazing cattle, they claimed there was water enough if local districts didn’t transfer water outside the region.

In 2012, public outcry prevented MID from selling water to the Bay Area, but even during the ensuing drought, the nearby Oakdale Irrigation District (OID) continued promoting water sales until it ran into legal opposition that stalled its marketing strategy.

Some farmers like the water sales because they enable local farm water to be priced below the cost of delivery. Even without water sales, local farmers get water at very low rates; some studies have shown that customers for MID power subsidize district farmers’ irrigation water. 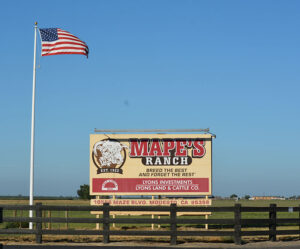 There’s also the developing problem of water sales on the Mapes Ranch, where the public interest and commodification of water may collide and threaten to go nuclear.

In 1983, Bill Lyons Sr, owner of the Mapes Ranch, formed an agreement with MID that entitled owners of the ranch to “use any and all water flowing into and through the Mapes Ranch from the District’s canals and drains for any purpose of owner.” In a recent letter to MID, Ronda Lucas, the district’s former General Counsel, referred to the water as “gift water” because the district receives no benefit from delivering water to the Mapes Ranch — it’s water that isn’t paid for.

On June 6, Del Puerto Water District “filed a notice of intent to adopt a mitigated negative declaration with the County of Stanislaus on the Del Puerto Water Sale.” Part of the notice reads, “besides being bordered on three sides with perennial rivers, Mapes Ranch receives surface flows, tailwater and operational spills from Modesto Irrigation District canals.”

Mapes Ranch’s abundance of groundwater is due to its proximity to three major waterways — the Tuolumne, San Joaquin and Stanislaus Rivers. Water in those rivers is a public resource and should not be appropriated for private gain. Recent research shows that, “Pumping large amounts of groundwater over a short period can be harmful. Natural waterways can begin to empty. And that can hurt freshwater ecosystems.”

Hydrologists have long known that pumping near rivers, lakes and reservoirs draws from those sources of water. Instead of agreeing to a mitigated negative declaration for the Mapes’ water sales, Stanislaus County should demand a full Environmental Impact Review of the effects of pumping groundwater on nearby rivers. MID should also review its agreement with the Mapes Ranch and be forced to justify how that agreement serves the public interest.

Beginning in the 19th century with George Lux, Henry Miller and James Haggin, the San Joaquin Valley has a long history of appropriation of water by profit-seeking entrepreneurs. As we enter a new era of prolonged drought and climate change, the public interest should be the first party to be served by public resources, especially life-giving water.