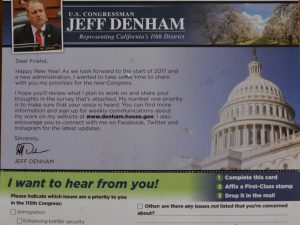 I received your questionnaire. Thank you for the opportunity to share my views on issues critical to our quality of life here in the San Joaquin Valley.

As you know, we are one of the most multicultural regions in the United States and immigration is a key local issue. I’m glad you’ve inquired about it.

I favor a pathway to citizenship for working immigrants. Like many others, I believe illegal labor has a depressing effect on wages, which is one reason I favor immediate institution of a $15 an hour federal minimum wage and strict enforcement of the law. I’m especially disappointed that so many of our farmworkers do the hardest work in the Valley for the smallest compensation; they should be justly rewarded for their labor.

In an age of drones and satellite surveillance, building a wall along our border is an absurd proposition. We need to favor efficiency over symbolism and combine political will with today’s technology to reduce illegal immigration. As soon as we institute laws that punish severely those who hire illegals instead of the illegals themselves, you’ll see immediate reductions in illegal immigration.

I strongly oppose exploitation of our rivers by a few favored interests and would like to see restoration of our wetlands heritage and renewed efforts to insure the ecological integrity of the San Joaquin Delta. I oppose sending our region’s water south in efforts to prolong unsustainable farming and urban sprawl.

I whole-heartedly agree that we need to repair, rebuild, and improve the nation’s infrastructure, including roads, highways, and bridges. We should begin immediately. Funding could be underwritten with prudent cuts in military expenditures.

While balancing the federal budget isn’t urgent, I do agree that eliminating the tax dodges and loopholes that have enabled the wealthiest among us, including corporations, to avoid paying their fair share of taxes should be an immediate priority. The budget is in large part out of balance because of our failure to institute and enforce pragmatic tax policies.

We can begin to reduce the national debt with a more progressive income tax. It should be clear by now that trickle-down economics has failed. We need a return to sound economic policy that includes fair tax rates for all.

I agree we should repeal the Affordable Care Act and replace it immediately with a single-payer program of the kind available in virtually every advanced nation but ours. In fact, one of your constituents has an excellent article about health care in today’s Modesto Bee. Read Dr. C.V. Allen’s detailed analysis here.

I also agree we should reform the tax code. See above.

You didn’t mention some other issues of interest, but offered the opportunity to comment and I thank you.

Housing is a critical need for many in our region, and I disagree strongly with our new Secretary of Housing and Urban Development (HUD). Instead of cutting funding for HUD, I support increases in funding. Lack of affordable housing in your district is punishing good people and we need to work as a community of shared government to help those people. There’s an excellent article about escalating housing costs in our region here.

Again, those who worry about costs need to consider what we spend on agricultural subsidies in our region. From 1995 to 2014, Merced and Stanislaus Counties received almost $150 million in dairy subsidies alone. If government can help business people, it can also help poor people, especially those who’ve been priced out of housing by the wicked combination of rising costs and stagnant wages.

Congressman Denham, we face many critical issues. Maybe we can agree that the poverty rate in our region is among the most urgent. Wealth inequality is not just a matter of character and hard work; some of the hardest workers in our region are among the poorest people in our region.

Social mobility in the United States now lags behind that of other advanced nations. Let’s make sure that hard-working people once again receive living wages, and people who are out of work once again have opportunities to work.

We need to restore a government that is once again “of the people, by the people, and for the people.” Thank you again for the opportunity to comment.