At approximately 9:00am, Saturday, July 23, Modesto Police Officers pulled a body from a Modesto Irrigation District Canal at the corner of Morris and Virginia Streets in Modesto, just two blocks east of Modesto Junior College. Officers on scene said the body was of an unidentified male and there were no signs of injury or foul play.

Though there is no evidence the deceased was homeless, homeless people who frequent nearby Enslen and Graceada Parks often use the canal for bathing and cooling down from the Valley’s midsummer heat. There are also usually a few campers along the canal in that vicinity at night.

It’s not unusual for irrigation releases to catch homeless people by surprise when they camp under the bridges that span the canals. Even though that kind of location can be damp and dangerous, it’s often chosen because it’s out of sight. 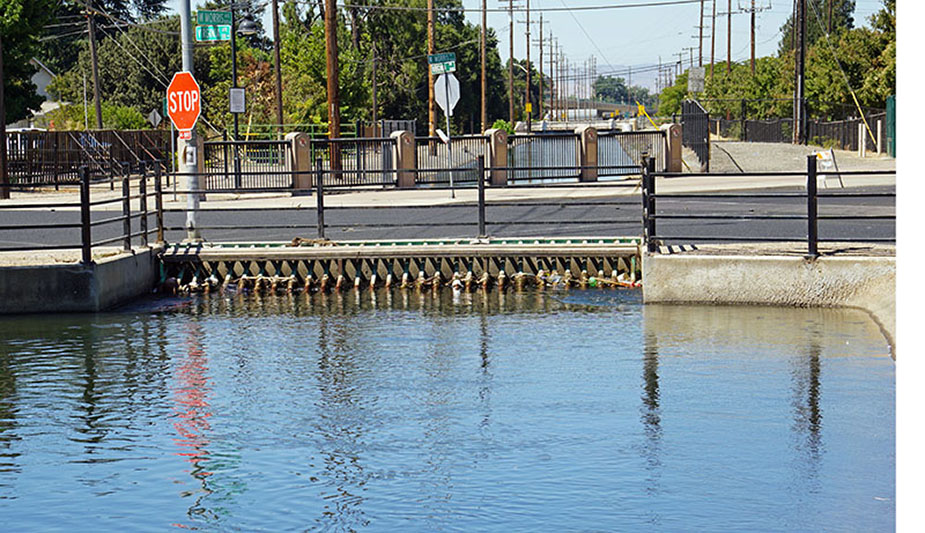 Water in the canal is near full capacity. At that volume, the water can be colder and the current more powerful than one might expect. It’s also deep enough to be over a short person’s head. A check gate made of pipes apparently caught the body as it was propelled downstream by the strong current.

An onlooker said it appeared rigor mortis had set in when police extracted the body. That would mean death was likely fairly recently, though cold temperatures can slow the progress of rigor.

The summer heat always presents a danger for people looking to cool off in the Valley’s vast network of irrigation canals. Ordinarily, the low levels and slow flows of water present little danger, but the water quickly becomes perilous as it rises and the current quickens and cools.

Across the street from the canal, along the Virginia Corridor, a sign reads, “Never Swim in Canals.” Given the peril, it’s best to avoid entering the canals for any reason, especially when they are full of water.