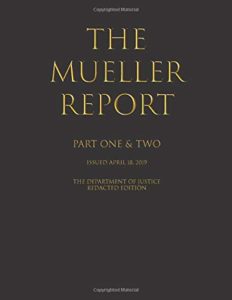 Every American citizen should read the Mueller Report, Part II. While Part I covers Russian interference into a presidential election, Part II centers on the behavior of the nation’s leaders subsequent to the interference, including the President of the United States.

High school teachers, college professors, law enforcement officers, military personnel, attorneys, judges, elected local, state and federal officials, and business leaders throughout the nation in particular have a special obligation to fulfill their civic duty and read what is destined to become one of the foundational documents of our nation’s history.

It was clear from his statements on May 29 that Mueller believes his report sufficient and thorough enough to address reasonable questions about Russian interference and attempts by the President and his associates to obstruct justice. He further believes that Congress and the people of the United States are the only powers with the Constitutional authority to pass judgment on the people and events featured in his investigation.

Part II of the report will be studied and taught for as long as people value the force of reason and the rule of law. It includes eleven incidents possibly involving obstruction of justice. The incidents are presented in outline form, lettered “A” through “K.” An additional section, labeled “L,” covers Overarching factual issues. Finally, there’s a section of rebuttal to the President’s attorneys’ Constitutional Defenses against the Special Counsel’s right to conduct the investigation.

Though Mueller advises that, “Judgements about the nature of the President’s motives during each phase [of the investigation] would be informed by the totality of the evidence,” readers with time constraints will profit from reading any one section. The report also includes an excellent introduction and concise executive summary.

The methodology of the Mueller Report is at least as important as its content. The structure is developed from the classical syllogism, a keystone of Western legal reasoning at least since the time of Plato and Aristotle. The basic parts of the syllogism—claim, support (evidence), conclusion—are drawn out into systematic presentation of each incident of possible obstruction.

Every incident in the report is developed into an argument or “case,” for or against the charge of obstruction. The fundamental elements of each case are virtually identical and divided into sections. There is an “Overview,” featuring a concise narrative of the incident in question. The “Overview” is followed by “Evidence,” which is further divided by source and kind. 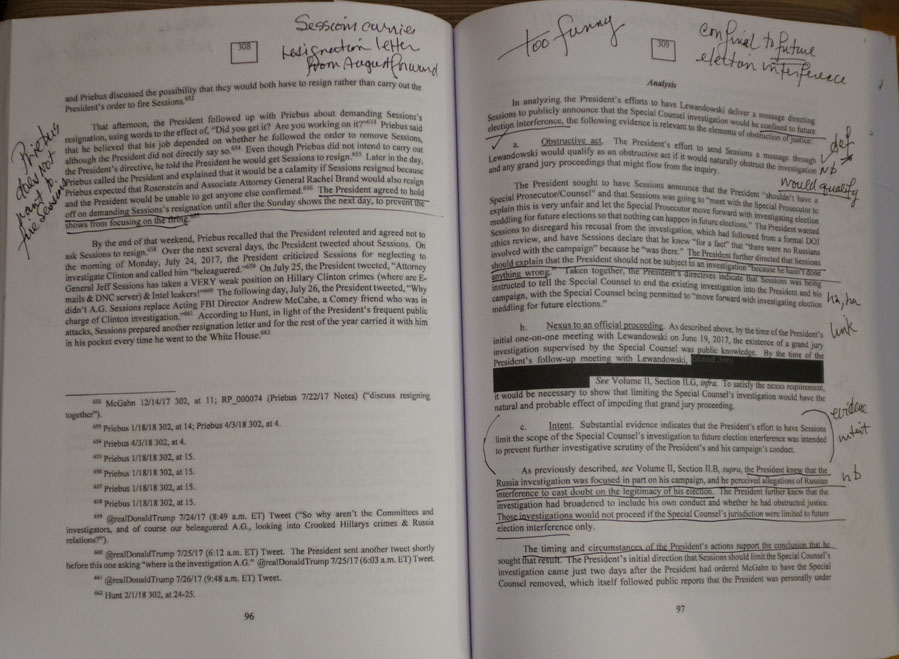 The “Evidence” section is followed by “Analysis.” Most “Analysis” sections include legal definitions of such things as “obstruction” and “intent.” They also include what the Mueller team calls a “Nexus,” a link to connect evidence to conclusion.

Weighing in at over a pound and a half and measuring 8.5 x 11 x 1 inch thick, the Mueller Report presents a daunting challenge for most any reader. However, except for the response to the arguments of the President’s attorneys, it’s remarkably free of dense legal language.

It also provides a gripping narrative of characters and actions that already loom over current events like larger-than-life players in a drama that will change the direction of history. The style is clear and free of rhetorical ornamentation, subjective inferences, and groundless speculation.

Most of all, the Mueller Report reflects the work of a public servant who believes that facts can lead to truth and truth can lead to justice. Throughout his long career, Robert Mueller not only earned the nation’s regard for valor in combat, he also earned the trust of both Bush administrations, the Clinton administration, and the Obama administration. He served in official capacities in all four.

In 1967, when he wanted to enlist in the United States Marines and serve in Vietnam, Robert Mueller had to wait for a year until an injury to his knee healed and he was deemed fit for service. Immediately upon arriving on the battlefield, he became a rifle platoon leader. Later, he earned a Bronze Star for rescuing a wounded Marine when ambushed and under enemy fire. Half his platoon was lost in the ambush.

James Madison, fourth President of the United States and the principal author of our Constitution, wrote in 1822, that,

“A popular Government, without popular information, or the means of acquiring it, is but a Prologue to a Farce or a Tragedy; or, perhaps both. Knowledge will forever govern ignorance: And a people who mean to be their own Governors, must arm themselves with the power which knowledge gives.”

In delivering his report to the nation, Robert Mueller offered knowledge tempered by facts, truth, and reason. If the American people truly mean to “be their own Governors,” they should execute their civic duties to avoid a “Farce or a Tragedy” and read the Mueller Report. Those wanting a clue to the report’s content and conclusions need only ponder briefly the last sentence of the Special Counsel’s response to legal defenses offered by the president’s attorneys:

“And the protection of the criminal justice system from corrupt acts by any person—including the President—accords with the fundamental principle of our government that ‘no person in this country is so high that he is above the law.’”

Read Part II of the Mueller Report. Read it now.