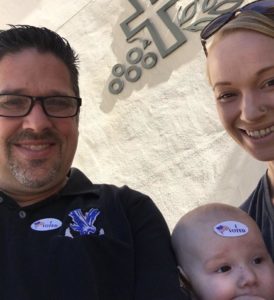 Chris Ricci, the entrepreneur behind the hugely successful and controversial X-Fest concerts that played in downtown Modesto from 2000 through 2016, is running for Modesto’s District 3 City Council seat. Incumbent Kristi Ah You is stepping down.

Ricci says he’s well past the controversies about security and noise that pushed him first to move the X-Fest and then cancel it altogether.

“We’ve got too many serious problems now,” said Ricci last Monday. “We [the city] don’t have any money, and hundreds of businesses might not make it because of the virus.”

“I’m a consensus builder,” he said, “and we’re going to have to start thinking outside the box.

A good example of this is forestry. We haven’t had the money to properly fund forestry for over ten years. Right now the city can barely keep up with trimming the trees, let alone maintaining them. This isn’t going to change any time soon.

There is a solution out there, a solution that maintains and beautifies the neighborhood but doesn’t break the city financially.”

Well-settled in his home near Modesto Junior College with a teenager heading to Roosevelt Junior High School and a child just learning to walk, Ricci sees cooperation between government, community members, and private enterprise as crucial to making the city work, especially in the near future.

“I see people sitting around arguing about money that’s already spent,” he said of local government. “Almost all the money we have is already allocated, and we can’t expect to have more anytime soon. We’ve got to bring people together to find new ways to get things done with the money we have.”

Recent reports have the City of Modesto facing a $20 million dollar budget shortfall as a result of shutting down the economy in response to the Covid-19 pandemic.

“We’ve got to sit down with everyone involved and figure out what to do together,” said Ricci. “One of the problems related to homelessness is a housing shortage. We’ve got to find ways to increase supply. One way is by tinkering with zoning and talking with land owners and developers.”

In addition to his experience with X-Fest promotions, Ricci managed a downtown entertainment venue for 15 years and served for eight years on the City’s Entertainment Commission. He’s especially concerned about the effects of the pandemic on small businesses.

“I build relationships with people and use their strengths to solve problems,” said Ricci, elaborating on his theme of cooperation and consensus. “There aren’t a lot of great ways to increase tax revenue other than supporting local business. It’s not about throwing money at things, it’s about facilitating business, growth, and the energy of the community.”

The city’s current mayor and city council have been characterized as dysfunctional almost from the beginning. Late last year, the Modesto Bee Editorial Board wrote,

With his many years of business experience downtown, including years of negotiation with city government, Chris Ricci could bring a much-needed change to a council in dire need of cooperation and consensus.

“Modesto needs somebody who can find solutions and break the logjam on a variety of issues,” said Ricci. “We need better communication throughout the government.” Few observers of local government over the last few years would disagree.