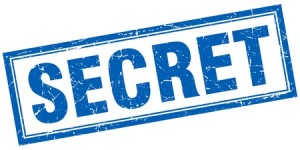 Insiders are speculating that the Oakdale Irrigation District’s (OID) secret water sale may have been the final straw for district voters, who just ousted longtime incumbent OID Directors Frank Clark and Al Bairos. Below, Bruce Frohman provides a history of secrecy in local government and argues it almost always hurts the public interest.

A basic truth about government is that secret decisions often have undesirable outcomes. In local government, very few legitimate reasons exist for secrecy. When public servants think that they know better than the people, they tend to make bad decisions because they shut out viewpoints that might highlight flaws, deficiencies, and defects.

When Secrecy is Justified

One legitimate reason for secrecy is for decisions involving litigation. Public entities regularly have closed meetings to protect the public from losses due to litigation. Decisions usually focus on merits of a lawsuit and defense strategy. Absent public scrutiny, decisions made behind closed doors sometimes cost taxpayers more money than public scrutiny would have cost, such as when a case should have been settled rather than fought. However, the decisions made in closed session are often justified on the advice of attorneys.

Another legitimate reason for secrecy is to negotiate contracts. An agent of the government cannot negotiate the best deal if critics are constantly reviewing proposals and interfering with an effort to obtain agreement. However, once an agreement is reached, the final product should be openly reviewed and discussed in a public meeting before a formal vote.

The last legitimate reason for secrecy involves personnel issues where privacy of a public employee is warranted. No employee of any entity should have his work scrutinized by anyone other than a supervisor. Politicians can be considered employees of the public; every voter is like a supervisor. Therefore, politicians’ entire record should be an open book.

On many occasions, secrecy in local government has resulted in negative consequences for taxpayers.

Village One was the most expensive secretive project in Modesto’s history. The city council of the late 1980’s and 1990’s frequently met in the formative years of the project, making numerous decisions at meetings that were not publically attended or that received little media coverage. The net result was a windfall of tens of millions of dollars for residential developers while major infrastructure deficits were left for taxpayers to fund.

The Oakdale Irrigation District (OID) water sales to areas outside the district have essentially been without public scrutiny for years. The net result has been the sale of water at below market value, dry wells within the district, allocation cuts, and a possible future where supply may be inadequate for economic growth.

While district management validly stated that secrecy was needed to negotiate contracts, the public should have been allowed to review the contracts for flaws, deficiencies, defects, and most importantly, whether a precious resource should be sold. The public should always have a say about any agreement that will affect quality of life or availability of an essential resource.

For reasons unknown, the Modesto City Council of the 1980’s was desperate to redevelop the downtown. The council mostly operated outside the public view and entered into contracts that were not good deals for taxpayers. The Centre Plaza was a fiasco.

The City of Modesto used eminent domain to take private land and then paid to build a convention center and parking garage at 9th and K Streets.  A private developer built the hotel and eventually went bankrupt. The project has lost money for the City of Modesto every year since it was built in the 1980’s. Year 2015 will be no different.

In 2000, after years of financial turmoil in the project, the new city council learned of the damage caused by the bad contracts. The City of Modesto had lost ownership of the land under the hotel when the developer went bankrupt. In addition, the old council had written a contract where the hotel could use the city owned parking structure for free in perpetuity. The city had to pay off the construction loan on the parking garage, maintain and operate the garage, and let patrons of the privately owned hotel use the structure for free. The unfair arrangement continues to this day as no city council has ever been able to cure the bad contracts.

Towards a more perfect government

Elected officials and government staff members should encourage public participation, not discourage it. When the public is deemed by leaders as not knowledgeable enough, the public should be educated. Citizen input should be valued, not shunned.

Presently, we are a long way from a perfect government. As long as local leaders in government prefer secrecy over the public process, Stanislaus County is destined to have defective government.