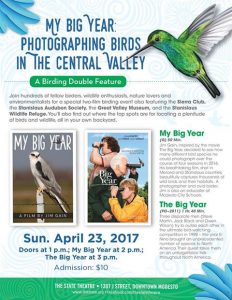 Though it’s one of the most altered landscapes in the west, the northern San Joaquin Valley still retains remnants of its marvelous natural history. The most obvious are the winter flights of waterfowl, still numbering in the hundreds of thousands.

But many of the Valley’s natural treasures, even some of the most spectacular, are hidden from all but a select few Valley residents and visitors. These hidden gems include common but nonetheless spectacular birds like the Common Yellowthroat, White-tailed Kite, and Bonaparte’s Gull. While these birds are almost always present, they’re usually seen only by accident or by those few people who know where and when to look for them—and most of those people are birders.

Hardcore competitive birding is a mania as irrational as gold fever. Rather than the stereotypical little old ladies in running shoes, it typically features men, either young guys running on pure passion and little to no overhead, or well-off types with state-of-the art equipment and the time and money to drop everything and pursue the rare bird of the day, no matter how distant.

Most people, millions upon millions of them, enjoy birds in their backyards and on trips to the mountains and seashore where they become curious about close avian encounters. In between these people and the compulsive competitors are birders who count their sightings and keep lists but manage to avoid giving in to the manifold temptations of obsession.

Modesto’s Jim Gain has managed to commingle competitive birding and bliss by putting family, job, and friends first, even while acquiring an impressive command of local natural history and adding new birds to his list when traveling. He’s managed to see almost 300 bird species in Stanislaus County alone and is one of our most informed experts on local wildlife.

An accomplished photographer, Gain is also well-known among the Valley’s serious birders as someone who more often than not will capture an excellent photograph even under unfavorable conditions. Anyone who’s ever tried to photograph birds immediately realizes how difficult a challenge this really is.

Last year, Gain decided to add a degree of difficulty to the common birding game known as “The Big Year.” In a typical Big Year, birders try to list as many birds as they can see in given region in one year. Typically, big years cover a state or county. The most famous and intensely competitive are those that cover North America, including Canada and the Aleutian Islands. Jim Gain decided to complicate the game by having his Big Year include only those birds he could photograph in Merced and Stanislaus Counties.

Since Gain is man of exceptionally high standards, what he counts as a photograph isn’t just a blurry grab shot of a vaguely familiar bird. Instead, Gain’s photographs are typically sharp and sensitive renditions of birds in their native habitat, often in light that reveals new aspects of color and structure.

Gain has compiled his Big Year sightings into a short film entitled, My Big Year. It is both entertaining and educational, especially for people who would like to know more about local birds and their Valley habitats.

In a unique double feature, Modesto’s State Theater is showing The Big Year, featuring Steve Martin, Jack Black, and Owen Wilson, along with Jim Gain’s own film of our local birds.  A gentle comedy, The Big Year is based on the true story of three obsessive birders competing in a North American Big Year. Roger Ebert wrote that The Big Year, “has innocence and charm that will appeal to families,” and gave it three stars.

Given its degrees of difficulty and mastery, Jim Gain’s hour-long film is a five star must-see for anyone interested in the Valley’s spectacular bird life. Both The Big Year and Gain’s My Big Year are showing Sunday, April 23, beginning at 2:00pm.