January 24, the war boiled over into shouted accusations. Both Mensinger and Byrd accused the other of lying, an outburst  brought on by Byrd’s removal from the San Joaquin Tributaries Authority (SJTA), where he was replaced by Mensinger.

While Mensinger insisted as late as last Saturday that the change of positions was “routine,” Byrd and many others believe the move was motivated by a willingness among the board majority to sell water, most likely to San Francisco. The SJTA is a coalition of regional water users formed to protect historic water rights through unity and shared resources.

Many close followers of MID’s water policy also believe a desire to sell water was behind the decision to terminate the General Counsel, who was believed to oppose water sales. Mensinger said recently that the board majority felt a change was needed but water sales were not a factor in her dismissal.

A proposed water sale to San Francisco in 2011 resulted in a huge turnover on the MID Board of Directors, when incumbents were voted out. Shortly thereafter, General Manager Allen Short resigned, followed by MID water attorney Tim O’Laughlin. Given the huge public outcry opposing water sales at that time, it’s unlikely today’s board would revive the water sale.

But what many fear is the State of California may offer to mitigate demands for higher flows along local rivers in return for water transfers, most likely to San Francisco. Byrd has said repeatedly he will never agree to water sales outside the Modesto Basin.

OID’s business plan depends heavily on water sales to buyers in the southern San Joaquin Valley. Thus, O’Laughlin is widely viewed as a promoter of such sales, especially in view of his history at MID. The City of San Francisco, along with MID and OID, is a member of SJTA. 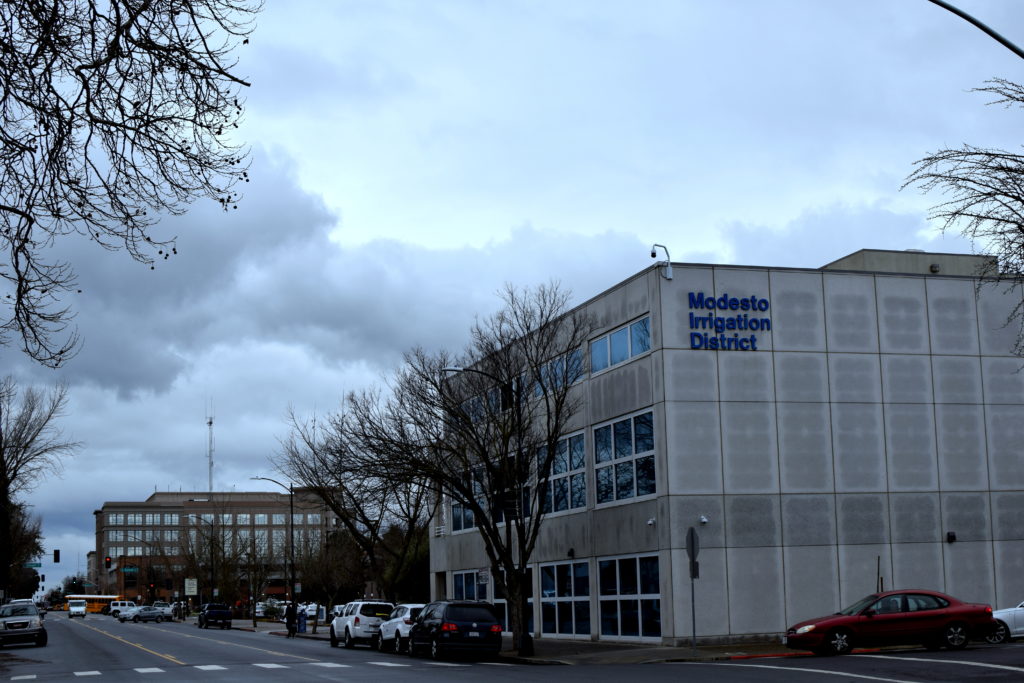 The state’s demands for increased flows along local rivers, including the Tuolumne, San Joaquin and Stanislaus, are widely viewed as a “water grab” that violates historic water rights. But given the financial impacts of increased flows—the flow requirements would result in far less water for farmers—local water districts are hoping to find ways to fend off or mitigate the state’s standards, which could include 40 to 50% higher flows. Local districts have also joined in lawsuits against the state, but the costs promise to be exorbitant.

Until Stu Gilman replaced Jake Wenger on the MID Board, there was general unity among Blom, Byrd and Wenger. Campbell frequently supported them. They were routinely pro-farmer on issues of water and electricity rates.

Gilman’s upset of Wenger was seismic in more ways than one. First, he ran on a promise to achieve economic justice for MID ratepayers, who are widely believed to subsidize farmers through exorbitant rates for electricity. For years, farmers at MID have paid less than the cost of delivery for their water, and several studies have shown the deficits have been made up by charges to urban customers.

Prior to Gilman’s win, MID Board members had agreed to a gradual increase in water rates for farmers, but critics felt the increases were too little and too late. Gilman was able to capitalize on widespread dissatisfaction among urban residents, whose resentment of the farm subsidies has grown over the years.

Ironically, OID farmers pay even less for their water than MID farmers and their routine water sales stir far less public controversy than even hypothetical MID sales. But that’s almost certainly because OID has managed to marginalize complaints about its water policy, even to the extent of suing board members who disagree with the majority.

Even as public sentiment seems to be moving against farm subsidies by urban rate payers, there is still widespread opposition to the state’s “water grab.” Nonetheless, local farmers and urban residents seem to have a blind spot about both water rates and sales.

To people outside the region, water sales, as practiced by OID, suggest we have a surplus of water. Moreover, when farmers insist on getting water at below the cost of delivery while urban rates keep rising, they risk turning widespread public support into widespread public resentment.

Again, to observers outside our region, especially those willing to pay top dollar for water, our water policies seem hypocritical at best. Though we insist increased flows will damage our economy irreparably, we routinely sell water outside the region. And our farmers, even in midst of an unprecedented boom brought on by world-wide demand for almonds, seem to believe they’re entitled to water that isn’t just free, it’s provided at prices below the cost of delivery.

It could well be that MID Board members Mensinger, Campbell and Gilman have become more sensitive to these issues than either Byrd or Blom. This doesn’t necessarily mean the three board members favor water sales. Instead, they may realize that the state has the upper hand in the controversy over flow requirements, not just in terms of ultimate authority but especially in the court of public opinion.

While Byrd and Mensinger may currently be at loggerheads, there’s no question each director is a passionate defender of his district’s interests. Both may learn that no matter how they’re resolved, their conflicts won’t matter in a battle against powers far greater than any coalition of locals. Past history may have put our water districts in far worse bargaining positions than they imagine.