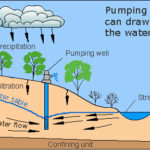 Fact? Fiction? What’s the diff? Even though the state has mandated sustainable use of groundwater resources, there’s still a lot of misinformation about groundwater, rivers, and aquifers. Sometimes the misinformation appears in mainstream media and adds to public confusion about the harm caused by overdrafting groundwater. That’s what happened in a recent Modesto Bee opinion piece by Janie Gatzman. Gatzman is an appraiser with American AgCredit. In “Orchards on the […]

No one knows where the rumor started, and so far no one’s been able to confirm it—the story around Stanislaus County is that the aquifer has started flowing uphill. Implausible as it may seem, the tale is based on growing awareness of just how many giant pumps are operating twenty-four hours a day in the eastern portion of the County. Over the last decade or so, land that once featured […]