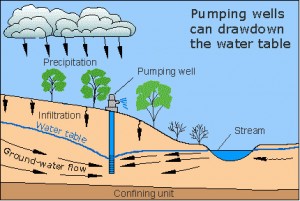 Even though the state has mandated sustainable use of groundwater resources, there’s still a lot of misinformation about groundwater, rivers, and aquifers. Sometimes the misinformation appears in mainstream media and adds to public confusion about the harm caused by overdrafting groundwater.

That’s what happened in a recent Modesto Bee opinion piece by Janie Gatzman. Gatzman is an appraiser with American AgCredit. In “Orchards on the east side are not a new trend,” Gatzman argued that groundwater-dependent farming in Stanislaus County’s eastern foothills is sustainable because decades-old farms have not, “caused land subsidence, widespread residential well failures or significant impacts to downstream city wells.”

Gatzman is apparently unaware of a large cone of depression in the exact region she’s talking about. It’s widely agreed that the groundwater deficit is the result of overdrafting by farmers in the foothills east of Turlock.

In fact, the City of Turlock is rushing to locate surface water supplies because it can no longer depend on groundwater. As long ago as August of 2013, then Turlock Mayor John Lazar said,

“Now that the farmers on the east side are pumping all our wells dry, there’s no water in our aquifer.”

“The groundwater in our area is a diminishing resource. Pumping is exceeding that resource, and that’s leading to a general decline in groundwater levels.”

More recently, people living in and near Denair, which is east of Turlock, have experienced clusters of dry domestic wells. The situation is so severe that Stanislaus County Supervisors will have a town hall meeting on August 12 to address the problem.

Contrary to Janie Gatzman’s claims of sustainable farming in the eastern foothills, the facts show the Turlock basin has had a groundwater deficit in some areas for years. Any equilibrium in groundwater levels is mostly due to recharge from the Tuolumne and Merced Rivers. A 2008 study commissioned by the Turlock Groundwater Basin Association found the following:

“Groundwater levels have been declining since the mid-1990s, and declines may have accelerated during recent years. However, the groundwater system has been in a near-equilibrium state with the water use since about 1990…The principal hydrodynamic adjustment has been an increase in the recharge from the Tuolumne and Merced rivers.”

What this means is that in many cases when there is a severe drawdown of groundwater levels from overdrafting, recharge is due to water drawn from our major rivers. Though unaccounted for, that diverted water means reduced flows for fish, downstream farmers, and urban users.

Groundwater-dependent farming is not only unsustainable, it frequently draws on water belonging to others—the water can be from rivers, lakes, reservoirs, or neighboring property. Most every expert in the field of hydrology today will say that farming should rely primarily on surface water with groundwater held in reserve for emergencies like the current drought. When we sell surface water outside our region and permit conversion of rangeland to permanent crops solely dependent on groundwater, we promote unsustainable agriculture.

Unless we want to delay solutions, we shouldn’t deny problems associated with groundwater-dependent farming. The future of agriculture depends on facing hard facts and working within the sustainable limits of finite water resources.