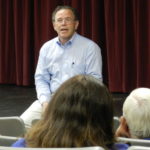 The decision to include Wood Colony in Modesto’s General Plan haunted Mayor Garrad Marsh the full four years of his first term in office. Marsh’s critics insisted he’d sold out to developers and cried for his scalp. Today, with the defeat of Measures I and G and the rise of Ted Brandvold as the developers’ choice for mayor, Marsh looks like a prophet. He’s said all along that those who […]