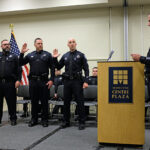 “A police officer will arrest people when they don’t need to be arrested,” said a homeless man living near a park on Modesto’s troubled West Side, “but a cop only arrests people when they should be arrested. Mike Hammond is a cop and he’s a good cop.” Hammond’s name comes up a lot among homeless people and he’s something of a legend on the West Side, where he once received […]