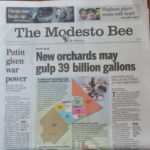 In fall, 2010, the Columbia Journalism Review’s report about the dearth of news in Modesto was met with ignorance and denial. Most Valley citizens never heard of the report; of those who did, denial has long been their default reaction to negative news about their beloved home. Sometime during the mid- to late-nineties, when Modesto began ranking last or next to last in various quality of life categories, regional leaders […]