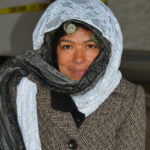 Those few Valley citizens who get to know homeless people by name always notice when they’re missing. Rosario Quintana goes missing frequently, but because she’s almost always very visible, word gets around among people who know her whenever she turns up, which could be anywhere from Riverbank to Modesto and points beyond. In the late fall of 2015, Rosario was seen on Oakdale Road, south of Briggsmore Avenue. She had […]