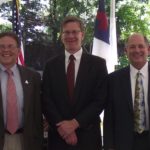 Richard Nixon and Jerry Brown have shown that while politicians don’t have nine lives, they often have at least more than one. The thought must be comforting to Modesto Mayor Garrad Marsh, because since taking office he’s seemed intent on political suicide. Almost simultaneously with being sworn in, he announced he was going annex Salida. There were only two things wrong with the proposal, both of which were toxic: (1) […]

One of Vance Kennedy’s first jobs for the U.S. Geological Survey (USGS) was a study of “sediment transport” in streams throughout the state of Georgia. He probably got the job because of his degree in Chemical Engineering from the University of Pennsylvania and because he was the first student ever in the first course ever in the subject of Applied Geochemistry. When you study the streams and sediments of an […]