Every two years, Congressman Jeff Denham leaves his Virginia home and shows up in California to run his immigration shell and pea game.

In the shell and pea game, the object is to follow the pea while it’s supposedly concealed under a shell. The scam is that the operator of the game hides the pea in his hand and only places it under a shell after a player has pointed to another shell and lost the bet. In Jeff Denham’s immigration shell game, the pea is immigration reform and the shells are Republican leadership and the months and years between elections.

Here’s how it works: Because Jeff Denham’s California Congressional District 10 (CA-10) is about 40% Latino, Denham needs to appear willing to work for fair immigration policies.

Every election year, Jeff Denham makes a pretense in favor of immigration reform. His pitch always includes a mix of humane treatment for hard working immigrants and stricter enforcement along the border. It’s a winning combination, but somehow it never happens, and Jeff Denham knows why.

The first and most obvious reason immigration reform never happens is Paul Ryan, who today just happens to be the majority Speaker of the House of Representatives. Jeff Denham has consistently supported Paul Ryan at every opportunity, but as far back as 2012, Paul Ryan insisted there would be no immigration reform under Barack Obama; he repeated the pledge in 2015.

In 2013, a bipartisan group of senators known as “The Gang of Eight”—it consisted of four Democrats and four Republicans—wrote  the “Border Security, Economic Opportunity, and Immigration Modernization Act of 2013.” The immigration reform act passed in the Senate by a strong bipartisan vote of 68-32. However, Paul Ryan and then Speaker of the House John Boehner made sure it was never brought to a vote in the House of Representatives, and it thus expired at the end of the 113th Congress. 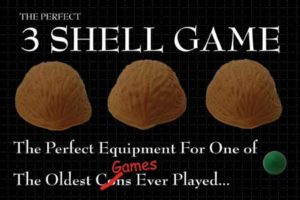 See the pattern? Ever since Jeff Denham was elected to the House of Representatives in 2010, he’s supported immigration reform that NEVER happens. But Denham’s shell game on immigration is even worse than it looks at first glance.

Publicly, Jeff Denham supports the DREAM Act of 2017, which would provide a pathway to citizenship for immigrants who came to the United States as children and are thus technically illegal. But Denham also supports Paul Ryan and Donald Trump, both of whom not only oppose the DREAM Act, but who support deporting illegal immigrants immediately.

And as for Donald Trump’s and Jeff Sessions’ “Zero Tolerance” immigration policy that has separated families and isolated children, Jeff Denham told CNN, “Not only is this current policy unacceptable, but the optics of pulling kids away from their parents is horrible for any party.”

Yes, the “optics” of cruelty is horrible, but so is the shell and pea game that enables Jeff Denham to appear moderate on immigration while supporting Republican Party leaders he knows will either make sure nothing happens to change immigration policy, or, more recently, impose “unacceptable alternatives.”

Jeff Denham has had eight years—the equivalent of two presidential terms—to achieve immigration reform. He’s failed to do so even with bipartisan support because during his time in Congress Jeff Denham has supported Republican leadership dedicated to the status quo or to cruel policies that hurt both people and the economy by deporting hard-working immigrants. It’s a shell and pea game.